Until this weekend I had some MP3s on one laptop, some on another laptop, and some on an external drive. I also had some on one of several iPods. When I wanted to listen to something at my house my options were usually connect my main laptop to my stereo via AirTunes and hope the songs I wanted to listen to were on there. If they weren’t I had to suffer through all kinds of cabling and reconnecting and it was a major pain. I decided I was going to put all the music in one place, set my back up laptop as a kind of MP3 server and leave it connected to the stereo all the time (via AirTunes). If I wanted I could access the library of songs with my other laptop as well. Here’s kind of what I was hoping to do: 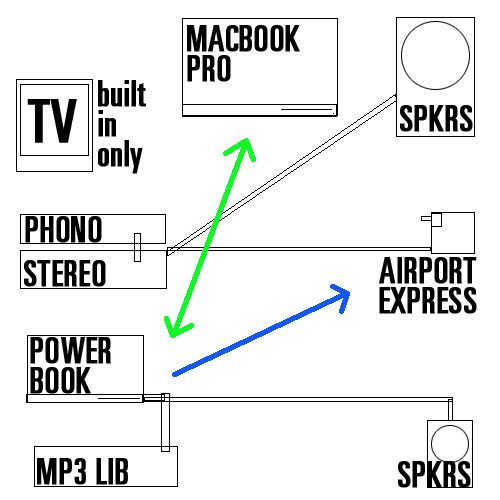 Once I got that set up I ran into a major problem. Nothing will play to my stereo via AirTunes without dropping out every 5-10 seconds. I’ve tried both laptops, changing channels on the network, restricting it to b only, and taking one laptop totally out of the loop. Still get the drop outs. This of course makes it completely unusable, which sucks because before it was at least a little usable. I’ve looked on the Apple forums and boards and seems other people are having the same problem but no one has any idea how to fix it. Crap!

My arms will never be cold again