Back Home in Vienna That sure is funny to say, but it’s pretty accurate at this point. After a week of planes, airports, security checks (including 3 at London Heathrow where I only changed flights!), conferences, events, hotels, and sleeping on assorted floors around Europe, being back in my own flat in Vienna is extremely comforting. The empty fridge not so much, but I’ll take care of that tomorrow.

The Creative Commons 5 year anniversary at c-base in Berlin was pretty fantastic. A few hours of talks about CC and demoing CC’d web projects (of course that was all in German so it was lost on me) and then tons of cake and adult beverages for those who wanted to partake. I was rocking a Club Mate or four, as you’d expect. Here are all of my pics from the evening and yes, that really is a European version of Edward Fortyhands. Of course they don’t know what a 40 is, so maybe this is Edward halfaliter hands.

I forgot to mention another super fun part of this week’s travels. When I got to Austria I bought a T-Mobile SIM card and threw it in a world phone I’d borrowed for the trip. It’s a prepay deal so I just buy a block of minutes and use them till it runs out and then buy more. Technically you can call a number and see what amount you have left, but it’s in German so doesn’t so a lot for me. Well, right after I got to France it ran out. I couldn’t buy minutes from any vendors there or later in Berlin because it’s T-Mobile Austria, not T-Mobile France or T-Mobile Germany which I guess aren’t linked enough to allow that. In theory I should be able to call in and just buy minutes with a credit card as well, but the SIM needs to be registered to an account to do that, and the number to call to register isn’t free, so I can’t even do that. I’m back in Austria now but since every single place is closed on Sundays I have to wait till tomorrow to get it running again. The slightly interesting part is turns out SMS messages are free to receive, so I keep getting them from friends and from Twitter, but I can’t respond which has made things a little difficult.

Also, bike nerds, I finally spotted a few fixed gears. I saw a few in the Plazes office in Berlin, and then tonight walking around Vienna actually saw two of them. Guess this isn’t the multi speed wasteland I thought! Also, Joi just got a new one, gonna have to send him one of our sweet new IAAL/MAF spokecards for it. Here’s the first one I saw in Vienna… Where are the kangaroos? 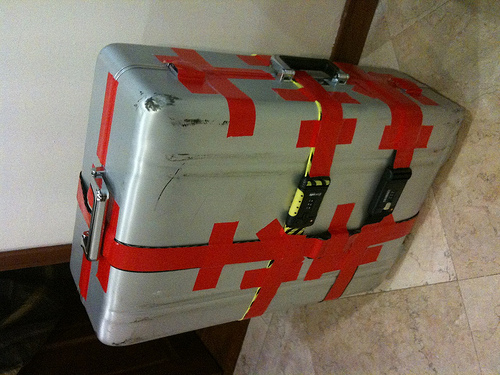 Travel Diary: In Between