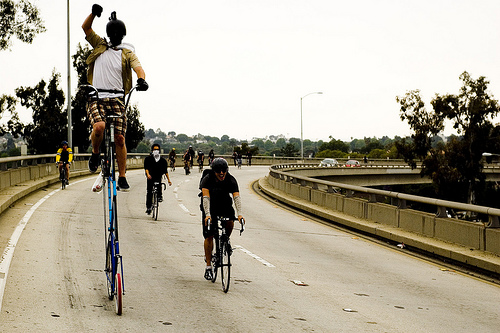 For more info on the above photo check out this post on LA Metblogs, and for a well thought out contrasting opinion check out Will Campbell’s thoughts about it here. I consider Will a very good friend of mine and like him I’m not going to judge anyone for their opinions of this, for or against, though as you might suspect I had slightly different take on it than he does and I want ramble on about some of those points. Will says that rides like these are

“stunts that have the potential to do more harm than good, not only to the bodies involved, but also the efforts that strive to legitimately bring bikes out of the gutter pan and into traffic lanes.”

And he’s not alone in that thought. A commenter on the LA Metblogs posts says:

“And you wonder why so few motorists respect bicycles”

However I just don’t buy it. I don’t buy the respect issue because, well I know how a calendar works and you can’t say you didn’t respect someone last week for something they did today. Motorists haven’t respected bicycles for a very very long time and it’s absurd to suggest that is valid because of something that happened yesterday. Motorists don’t respect other motorists which is evdent by how many accidents and fender benders happen every single day in cities all over the world. When you are in a car you are in a bubble and the fact of the matter is most people are happy with the isolation and don’t realize what they are doing until they plow into someone else. Or someone plows into them. When they hit a car it gets a dent, when they hit a cyclist the cyclist tends to get the worst of it so there’s a reason cyclists tend to be alittle more vocal about motorists not respecting them then other motorists. Not because motorists have any less respect for bikes than cars, but because the stakes are higher.

Without spending too much time on this point in particular I understand Will’s concern that these kinds of things can reflect poorly on a larger group of but I just don’t beleive that hold a lot of water. It’s a traditional arguement and it sounds good, but I think it kind of ends there. Also I know that there is no changing how people act, and how people perceive those acts so what you are left with is the realization that things are going to happen no matter how you personally feel about them, so your option is to ignore them, speak out against them, or join in. All vaid routes, just a matter of what you want for yourself at the end of the day. From what I’ve seen in person and what I’ve seen online, the people who were not there have much stronger, much more negative reactions than the people who were. In comments on Metblogs I’ve seen people called names and insulted, and these actions used to justify years of negative back and forth. In person I’ve seen motorists cheering on the bike riders, chidren standing up out of sun roof windows applauding while their parents smiled and took photos, and I’ve seen law enforcement amazed and amused and decline to give out citations. My point is the assumed gut reaction isn’t aways realistic.

But protest and rule changing aside, it’s fun. Everyone involved enjoyed themselves and has a great story to tell. Sure it’s risky, but so is everything else. We all have to decide what risks are worth while in our lives to make us smile. Some risks we can avoid, some we can’t. Some we can embrace.

Coach seats on airlines make us hate each other