This is going to give me nightmares

My friend Coop just sent me this Obama video which was linked on Reason’s Hit & Run blog. I watched it. I wish I hadn’t. Click play if you dare:

Maybe I’ve just payed too much attention to politics in my life, maybe I’m just too cynical, but anytime I see parents pushing their views on children I cringe. If you don’t think there’s anything wrong with that video, pretend it’s a room full of young impressionable children singing about marriage only being something between a man and a woman, or about how awesome Guantanamo Bay is. Think about how you’d feel if instead of wearing Obama t-shirts they were wearing something like this: 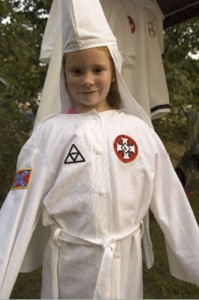 The message doesn’t make this kind of thing OK. In fact it fact it hurts the cause these people are trying to support. Using children to push your political, religious, or any other kind of ideals is just wrong. I’m really kind of disgusted.

I just got dropped I’ve written a few times on here about the wolfpack hustle ride in LA. It’s my favorite ride to go on and if I’m in LA on Monday night that’s where you will find me. That said, I haven’t been in LA many Monday nights recently and so I knew when I was getting on my bike and heading over there it was going to be rough. You see I get dropped on Wolfpack a lot. I generally need to do 3 weeks in a row to be able to finish it and depending on the route that could be more. Well tonight started off with a blast down Sunset which I was all in for, and then a sharp climb up Elysian Park and I just couldn’t pull that off tonight. I knew it right away and even though I’ve been working on hills, that was just too fast and my gearing was too high and a million other excuses why I couldn’t pull it off. But I knew that right away and so that was that. I’ll be in town next week and will give it another go then. It kicks my ass every time, but that’s kinda why I love it.

A while back Xeni and I went on one of those zero gravity flights. It was pretty damn amazing. Today, BoingBoingTV released an episode with a bunch of the footage we shot that day!

In the past week or so I’ve had close to 87 million people send me this poll on PBS.org. The poll is asking if Sarah Palin is qualified to be the Vice President or not. Let’s ignore the fact that polls like this are insanely hackable for just a moment, and ask the larger question, why does anyone care? People are acting like this is the actual vote and the outcome of this poll will some how have an impact on, well, anything except the traffic to PBS.org. It won’t. So what the hell?

Qualifications for the Office of President

This on the other hand, is enough to scare the piss out of me. In this Newsweek piece, Sam Harris makes one of the best cases against I’ve seen yet. He writes about her religion:

“In the churches where Palin has worshiped for decades, parishioners enjoy “baptism in the Holy Spirit,” “miraculous healings” and “the gift of tongues.” Invariably, they offer astonishingly irrational accounts of this behavior and of its significance for the entire cosmos. Palin’s spiritual colleagues describe themselves as part of “the final generation,” engaged in “spiritual warfare” to purge the earth of “demonic strongholds.” Palin has spent her entire adult life immersed in this apocalyptic hysteria. Ask yourself: Is it a good idea to place the most powerful military on earth at her disposal? Do we actually want our leaders thinking about the fulfillment of Biblical prophecy when it comes time to say to the Iranians, or to the North Koreans, or to the Pakistanis, or to the Russians or to the Chinese: “All options remain on the table”?

Also, isn’t it somewhat telling that all the sudden the discussion is no longer Obama vs. McCain but now Obama vs. Palin. And what does it mean that half the country is ask “who the hell is this woman and is anyone really serious about her being VP?” while the other half is spending all their time making up excuses to justify everything she says and does? I need to find a better home for these two sweethearts and I’m hoping someone reading this might be able to help. The basic story is this – they belonged to my exwife before we got married and when we got divorced last year she kept them. When she decided she was moving out of the country she asked a few people if they’d be interested in taking them and thought she found homes for both of them. Through some kind of mix up the people who she thought were taking the cats decided not to, unfortunately this happened after she’d already left the country so I was charged with watching them.

Initially I thought I’d just take them, as I lived with them for over 8 years and love them both very dearly but it’s become very clear over the last month that they need something more stable than what I can provide. I’m basically out of town 2 or 3 weeks every month which means I have to ask my land lords to feed the cats in the morning and evening. Once and a while this was no problem, but it’s definitely becoming an imposition that can’t continue. Additionally they travel a lot so the chances of me being out of town when they are also gone is quite high and worrisome. Cats are social and these two are clearly attention hungry. I’ve come to the conclusion that they need something dependable with people around all the time. About the cats. Starting from the left. The calico, Kira, is 14. She’s a total lover cat. She’d be completely happy doing nothing but sitting next to you getting scratched all day. She’s not the smartest cat ever, in fact I’ve caught her staring at the wall for extended periods of time, but she’s a total sweet heart. She’s very talkative and will actually come up and tap you to get you attention and remind you that she’d really like to be scratched right about now. She generally sleeps at the foot of my bed.

The grey one is Pig. Or P-dawg. Or Piggy. Actually her real name is Chi-Pig but as you can tell that’s rather flexible. She’s 13 and a little harder to describe as she’s got two very distinct personalities. Around me, and around anyone she’s ever lived with and gotten used to she’s one of the most affectionate cats ever. She snuggles with me on the couch all the time and is always curious what I’m doing. She loves toys and I always wake up to find her toys all over the living room or hallway and can only guess the exciting events that took place while I was sleeping. That’s the good side.

The bad side is when ever she’s confronted in her own house by people she doesn’t know. She gets very scared and at best runs away to hide in a closet, at worst will hide under some furniture and swipe at people when they walk by. I say this only applies to her house because in situations where I’ve taken her to the vet or someone elses house she doesn’t act out at all and just seems extremely timid. She’s lived with Kira her entire life and the two often snuggle up together, and Kira regularly takes on a mothering kind of role with her. It’s really adorable.

They are both inside cats, and have always been so they really wouldn’t know what to do if they got out so I need to find a home where they will continue to be inside. It’s also super important that they stay together, having seen the two of them together for so long I’m pretty sure they’d be massively depressed and lost without each other. They have lived with dogs and haven’t had any problems with that. I don’t have a deadline, but the sooner I can find a home for them the better. I’m scheduled to be out of town almost 3 weeks already in October and have no prospect for anyone to take care of them during that time. Additionally the longer I’m around them the more attached I get and the harder it will be for me to give them up so I’d love to get them into a new, dependable, loving home as soon as possible.

If you have any suggestions, or prospective new families please let me know. Thanks. If you’ve been reading this site for a while you know I used to sing the praises of the suite of Apple tools like Mail and iCal but for one reason or another, mostly my growing obsession with having all my data online rather than tied to any specific piece of hardware I moved one at a time mostly over to Google. This worked fine and dandy when I had a phone with no calendaring and no mail to speak of, but having recently given in and purchasing an iPhone, I’m back in the world of trying to figure out how to use one with the other. Mail works pretty flawlessly, calendars not so much. We all know MobileMe still kind of eats ass.

When looking for solutions I kept finding something that would work between my laptop’s iCal and Google’s online calendar but not by iPhone, or the other way around. That’s no good, and if I’m going to go through the trouble of syncing something it needs to work simply and with everything. I asked for suggestions on Twitter and more than a few folks recommended Spanning Sync. I signed up for the free trial and it worked like a charm. Rather than adding my Google Calendar to iCal as a separate calendar, it asked which two to sync. Previously I had breakouts for me, friends, and business. Now I have breakouts for me, friends, and business. See how awesome that is? The clincher was when the free trial expired and I found myself scrambling to cover all the bases again and decided it was worth the $25 pricetag. Just now when adjusting a preference I saw an “invite a friend” option and clicked it and found out they have an affiliate thing too. So if you use this link to sign up for Spanning Sync you get $5 off and I make $5 for the trouble of sending you there. Fun!

Yesterday, Tara wrote up a very detailed description of how she got Google Calendar and iCal to play nice using some built in support options and if I hadn’t already been loving the Spanning Sync I probably would have given it a shot. Her suggestions are a little more involved, but are free and don’t require a third party middle man like I’m using which might be important to you. Anyone else had luck trying out a different option?