Maybe it’s my youth crew background, or maybe it’s that I like living places where the climate doesn’t call for much more, but for most of my life a solid hooded sweatshirt has been one of my staple items. Back in the day it was Champion or nothing, but as the quality of those changed I ended up looking elsewhere. Dickies and American Apparel have made some that I’ve dug for one reason or another, but always failed in one respect or another. Maybe the arms were too short, or maybe the color didn’t hold. Either way I’ve been looking for something better for many years. I’m pretty much thanks to Chrome I finally found it. 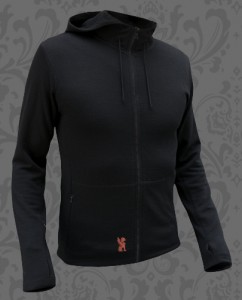 It’s no secret Chrome makes some of the best messenger bags out there (more on those later in this series) and their attention to detail is spot on. So when they announced the Cobra Hoodie last year I was really interested. The early specs caught my eyes, 100% merino (which is pretty much the ideal material since I want something I can wear all the time – inside or out, and on a bike), secret key pocket on the wrist, slim fit so it can easily be worn under something else if it gets too cold, and longer cut in the back so you are flashing the world your add when you ride a bike, extremely minimal branding, comes in black, etc. The price however, $200, scared the crap out of me. I decided I had to see it in person and could then make a rational decision.

Of course by “rational decision” I mean “impulse buy.” I went to the Chrome Store in SF and tried one on. When I didn’t want to take it off I knew I was screwed. I bought it immediately and suffered a good week of buyers remorse. At the end of the first week, when I realized I’d worn it every day since I bought it, for the majority of the day, that remorse faded. If you’ve seen me since early December chances are I was wearing it, and in hindsight I can say it was probably some of the best spent cash ever. It’s amazingly comfortable and the material keeps you cool when it’s warm, warm when it’s cool, wicks moisture and it amazingly breathable. The fit makes you look 20lbs lighter and is perfect on it’s own or under another jacket if need be. It’s seriously my favorite hoodie ever and since the black ones are limited I’ve actually considered buying a back up just in case something happens to it.

How to make a skateboard bearing ring