It’s the future, which means that people have scanners and are scanning old hard copy things into digital format. Some of these people are friends of mine, and some of them have things relating to me a long ass time ago. I’ve gotten smacked with the nostalgia stick a few times this week so I thought I’d share some of it with folks here. They are after the jump if you are interested in such things.

First of all we have fat me. Renee posted this on facebook. This is awesome because people don’t believe me when I tell them I lost a ton of weight when I went vegan, and also because Renee was one of my closest friends all through high school and I haven’t talked to her at all since then. Score one for the internet. Yes I’m wearing a pinkish/purpleish shirt. And a knit tie. Whatever, it was high school in Florida and this was a dress up dinner at the end of the year with my TV Production class. Shut up, like you were some cool hotshit all star in High School or something??!

Next we have some stuff from from the college years, Wendy just found and scanned this stuff and threw it up on flickr. Here’s a postcard I sent her and her roommates probably in 1994. She lived with friends Kim Snyder and Jason Black (of Hot Water Music fame). I remember sending this, but I have no idea where I sent it from. Even back then I just to take off on crazy trips all over the place. 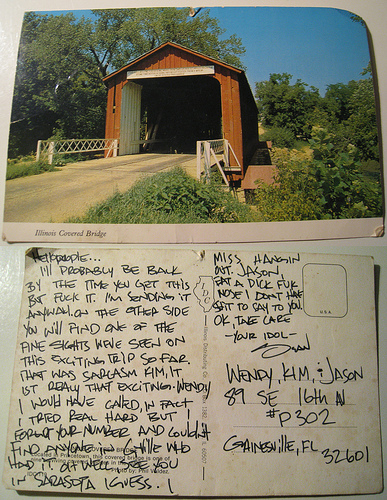 She also found this mixtape I made her. I don’t know if it’s good or bad that I still listen to a lot of the stuff on there, at least I had decent taste in the tunes. Go me! 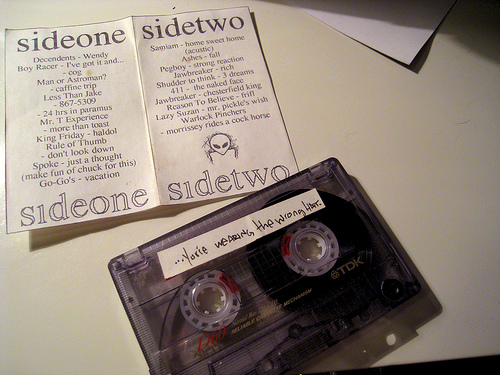 Thanks for joining me on this little memory lane drive by. If more things pop out of the cyber closet, I’ll be sure to keep you abreast of those important events.

That lasted a little longer then I expected…

Oh, this is going to be fun