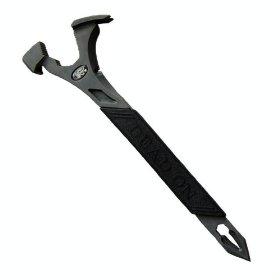 Tonight was the first of many CERT classes I’ll be taking over the next few weeks. I’ll be writing more about it on other sites in the near future but it’s awesome so far and just what I was hoping for. In tonight’s class we spent a lot of time talking about earthquakes and general preparedness, something anyone living in SoCal has heard again and again. At one point the instructor was talking about how everyone should have a crowbar in their bedroom, not to chase off intruders, but in case of an earthquake where debris falls and you get trapped they can provide the leverage you need to get yourself out. One of the other students said they had something called The Annihilator

which was some kind of multi-function thing which sounded completely made up. Turns out it’s completely legit and real and now I want one. Just look at that, tell me you couldn’t beat the crap out of some drywall with it!