[bubblicious photo by tonx]
Singapore and France. These are not countries known for their great coffee, but they are cities I’ll be spending a big chunk of the next 3 or 4 months in. You might be thinking “WTF you dumb ass, there is amazing coffee in Paris!” but you’d be wrong, proving that you are the one who is the dumb ass. If you like drinking burnt charcoal that has had every ounce or flavor roasted out of it then I guess you could get by in Paris, but if you actually like the flavor of coffee you are screwed. So in efforts to maintain some level of civility I’ve put together a bit of a coffee survival pack that I’ll be dragging around the world with me.

First of all, there is no question that beans are important. But we all know that it’s important that the beans are fresh. I’ll likely be bringing some freshly roasted Intelligentsia beans with me, but that will only cover the first week or two that I’m in Singapore, so I’ll have to con someone into sending me over some more while I’m there. Once I get to Paris things getting better because Square Mile is at least in the same region and I can order some beans from them and have them delivered without it being too pricey. So that’s the software so to speak, what about the hardware?

I need to have the tools to actually turn the beans into something drinkable so I’ve got a mini arsenal just for that purpose. I’ve got a Leifheit Page Kitchen Scale

for the math. Ever since one of Kyle’s late night twitter science dropping I’ve been paying more attention to weight rather than volume. How much coffee is in a scoop? Who the fuck knows. How much is in 35 grams? 35 grams. Every single time. So anyway, the scale is pretty important. This one is also awesome for travel because it’s small and flat so it’ll take up about the same space as a small paperback book. That’s important. For me anyway. 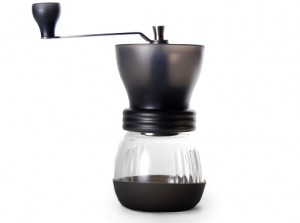 Now that I have the beans, I need to grind them. Since power supply changes from country to country, I felt that something without a power cord was a good idea. The Hario Coffee Hand Grinder

fits that bill and is also not too bulky. Now I had heard this thing was “amazing” and “all that” before I bought it, but I hadn’t actually used one. Once I did I realized it’s slightly less than “all that” because the bottom burr isn’t attached and floats around which creates a bit of an uneven grind. I did some more research and found this post which explains some technique and a hack to help keep things consistent. I think it’ll do the trick for this trip, but out of this whole set up that is the thing I’m least confident about and will be keeping an eye out something equally small and human powered that performs better.

, sadly it’s not. For two main reasons. The first of which is that I don’t currently own one yet. Yes that is a cue, if you want to buy me one I’ll happily accept it. The second is I know I can’t fly with the Co2 charges for it, and I’m not sure how available they are in other parts of the world, or how to even find them in a non-English speaking place like France. So while it’s great in theory, it’d probably not the most ideal for this kind of trip. Which means I’ll be forsaking espresso which is so sad I can’t even continue on that thought process. 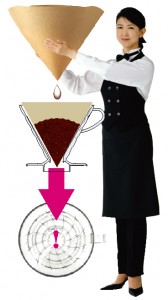 So I’m brining a pour over set up instead. No, not this little pocket sized woman. Hario V60

to that combo so I can make more than a single cup at a time and see what the hell I’m doing. That might be overkill. I’m aware of that already.

While that is a fully complete set up, I wanted to have a back up plan just in case, as well as a slightly different option to keep things interesting. I picked up a Clever Coffee Dripper to bring as well. At $13 I figured it was cheap enough to be worth the shot and I know some folks really enjoy the dual immersion+filter thing they have going on. Plus I feel like a super nerd if I’m bringing multiple coffee brewing method equipment with me around the world. And that is just as important as anything else.