This quote by Steve Jobs has been flying around recently even though it’s a few years old but it’s really good and I wanted to talk a little about it. Here’s the full thing:

“To design something really well you have to get it. You have to really grok what it’s all about. It takes a passionate commitment to thoroughly understand something – chew it up, not just quickly swallow it. Most people don’t take the time to do that. Creativity is just connecting things. When you ask a creative person how they did something, they may feel a little guilty because they didn’t really do it, they just saw something. It seemed obvious to them after awhile. That’s because they were able to connect experiences they’ve had and synthesize new things. And the reason they were able to do that was that they’ve had more experiences or have thought more about their experiences than other people have.

Unfortunately, that’s too rare a commodity. A lot of people in our industry haven’t had very diverse experiences. They don’t have enough dots to connect, and they en up with very linear solutions, without a broad perspective on the problem. The broader one’s understanding of the human experience, the better designs we will have.”

This isn’t just really good, it’s really, really good. That’s 2x the really. Really. It’s so good because while it’s specifically about design it actually applies so much more, and actually goes a long why in helping me describe what it is that I do – even though that answer might still be confusing to some people.

Steve is talking about design, and likely product design at that, but I think the essence of this is the need for lots of points of reference and lots of dots to connect. And the need fully digest something to be able to isolate those points worth connecting. Think about your favorite movie, how many times have you seen it? I’ve talked to people before who when mentioning a movie say something like “oh that is one of my absolute favorite movies ever! I’ve probably seen it 5 or 6 times!!!” This doesn’t make any sense to me because movies that I simply enjoy a lot I’ve seen over 10 times, and movies I really love easily over 100. I couldn’t even tell you how many times I’ve watched The Big Lebowski for instance, but it’s enough that I know almost every line by heart and have stared at each scene and studied how they were put together for hours. This is the difference between just watching something and really getting it. Of course Steve isn’t talking about watching movies, and neither am I really, it’s just a simple example of how really getting into something means different things to different people.

It’s no secret that I’m a very obsessive person who has to regularly fight the compulsion to collect things. I’ve been this way my whole life even if I only realized it in the last 5 years. I find something interesting and for some chunk of time that becomes my entire world. I fall asleep and wake up thinking about it. I dream about it and day dream about it. I endlessly research it and try to find the people who know the most about it and try to soak up as much of that information as possible. I immerse myself in that world until I feel like I get it. Sometime I get it in a few weeks, sometimes it takes years. And once I do feel like I’ve really “groked” something, I rarely leave it behind, even if it doesn’t continue to be my all encompassing daily routine. In fact, often it continues to expand – usually because of bits and pieces I fine in later obsessions.

In many cases my obsessions take up so much of my time that I end up needing to find a way to justify the time I’m spending on them and end up turning them into businesses. If you look at my history this becomes pretty obvious. My record label spawned from an obsession with punk rock in general and subcultures like youth crew straight edge hardcore movement specifically. My record distribution company spawned from an obsession with how those subcultures grow and manifest themselves. My design firm spawned from obsessions with advertising in general and the emotional responses imagery can provoke in people specifically. While I never actually started a real business from it, it was my obsession with old Japanese toys in general and Jumbo Machinders and Sofubi Kaiju specifically that drove me to the web and got me creating things there. Before these toys and the community I found around them online I mostly used the internet for one off communication and minor games, the toys gave me a reason to write articles, do research, take phones and try to actually build something. (My first “blog post” predates blogs considerably, and was a guest article in the mod 90’s on Alen Yen’s Toybox about an 18″ knock off Getter Robo figure I’d won on ebay.) Continued obsession with arts, and my growing connections to visual artists as the creative director led to my involvement in the art gallery world, and continued obsession with web communities and relationships led to the launch of blogging.la. 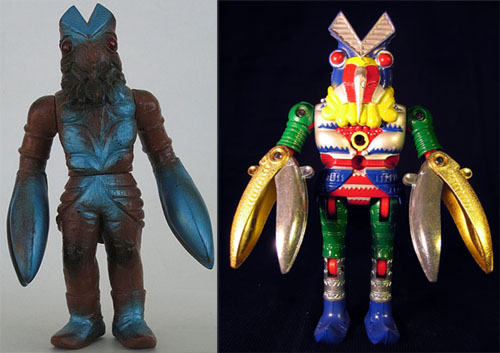 Not everything has had a justifiable business come from it – lots of the things I’ve collected have been from obsessions that lasted only as long enough for me to track down a bunch of them, learn enough about where they came from and what was drawing me to them. Sometimes I just collect images of them. Some of those things stick around, some are sold to make room for the next thing, but the info and knowledge I amassed from studying them carries on into everything else. I learned print production from designing concert flyers at kinkos. I learned product design from seeing the difference between how Ark and Popy designed toys for the same robot characters with vastly different results. (image above is a rendition of Baltan by Popy on the left, and Ark on the right) I learned marketing from touring with punk bands. I perfected trend spotting by hanging out in fixed gear bike shops in LA and Tokyo. I sharpened attention to detail by watching baristas at Intelligentsia craft the perfect cup of coffee again and again. I learned business best practices by sitting in the lobby of technology conferences and listening to what people said about others -who did they have respect for and why, and who didn’t they. Most recently my obsession with the D.I.Y. culture that fueled much of my punk rock years has drawn me to hackerspaces. I spent years hanging out in European hackerspaces before attempting to open one myself. It’s a different world for sure, but many of the underlying themes are constant. That chapter in my life is still being written.

Travel has also been a massively important piece of this – going to many places regularly and surrounding myself with interesting people gives me a much better perception of who is doing what and why, and where similarities pop up and dots that need to be connected. When I talk to people and companies, I’m able to draw from all these experiences. Otaku level knowledge only comes from immersive obsessions, and I’ve spent a lot of my life collecting obsessions.

This existence isn’t all roses and sunshine – part of the trade off with always trying to find new and exciting things means to make room in my head for it I often have to leave less shiny uninteresting things in the past. In means I need to see a pattern developing before I recognize new threads. It means I’m rarely content with my surroundings and when I have 5 free minutes I need to find something to fill them with. It means I go through cycles of insomnia because something I’m so excited about something new that I can’t shut off my brain to sleep.

But I wouldn’t have it any other way. I can’t imagine looking at the world through any other viewpoint and I love being able to help people see their projects from another perspective. I love tying things together. And these things all become part of my repertoire, part of my arsenal. I know that doesn’t really answer the “what do you do” question any better, but hopefully it sheds a little more light on the process. 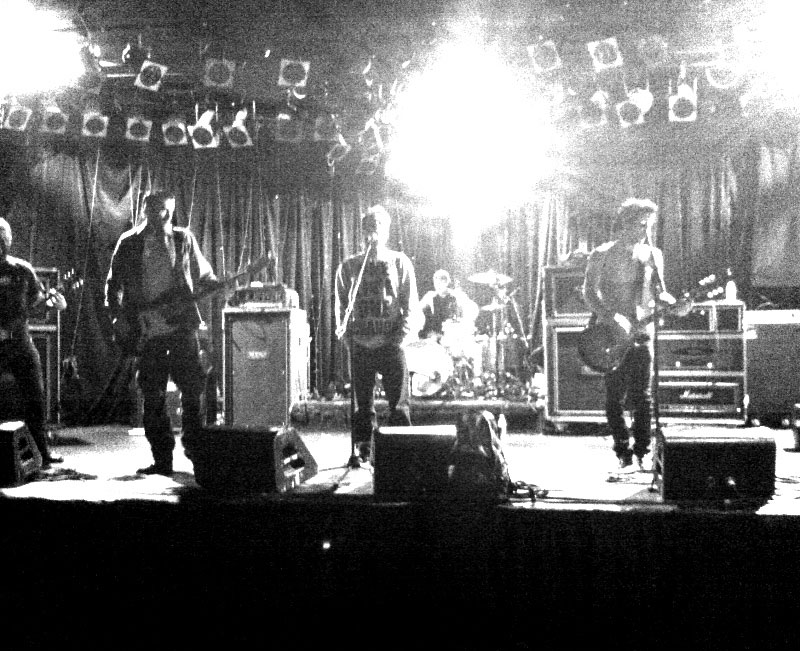