There is something awesome happening on Twitter right now, but since as I write this there are under 300 people following this account I suspect you might be missing it. Allow me to shed some light. Here are the major players: 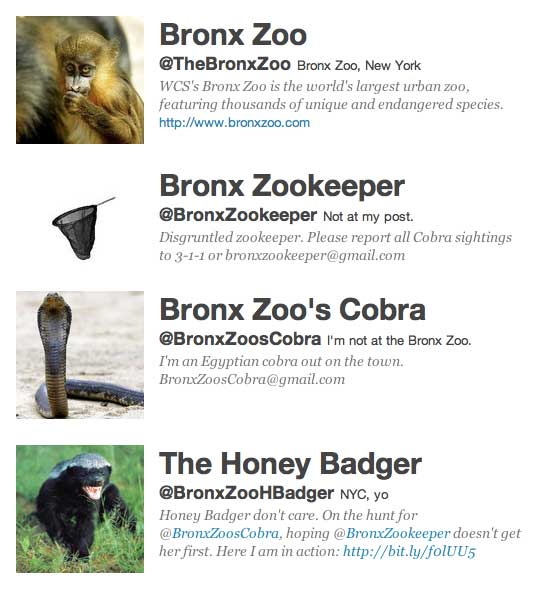 I’ll get to them in a second, first – the back story. Last month I blogged about this video:

Yes, that’s the Honey Badger video which if you haven’t seen it you really need to just stop right here and watch it. It’s lulz. I’ll wait… OK? Good. So now we all know that the Honey Badger not only doesn’t give a shit, but also enjoys eating cobras. Right, so skip ahead to last week when the Bronx Zoo announced that their Egyptian Cobra had escaped. While mildly scary, this isn’t quite the same as a Lion getting out or anything and they likely made the announcement and expected the story to just go away. They tweeted something to that effect:

But there was something about it that caught on and people on twitter started using the #bronxzoocobra and #bronxcobra hashtags to append their original and witty jokes. And actually I shouldn’t really consider @TheBronxZoo a player in this from here on out, as they have completely missed the boat on this and have no further contributions.

But some other imaginative character picked up that lead and ran with it. Enter @BronxZoosCobra. A snake out on the town.

Someone set up this account and is tweeting the tails of a snake checking out all that NYC has to offer. Seeing the sites. Visiting the spots. Spotting the celebs. This crazy cobra is having the time of it’s life. But let’s remember this snake is *supposed* to be locked up in the Bronx, but someone screwed up and it got out. Who screwed up you might ask? @BronxZooKeeper.

This account is full of the tweeted failures of the poor zoo keeper out trying to recapture the cobra. You can’t help but feel bad for the guy. But he’s clearly not cutting it as the cobra hasn’t been captured just yet. Maybe the keeper should follow the cobra on twitter to get an idea where it might go next?

I have to say, as a bystander watching all this unfold, this was the point this went from amusing to completely full of win. Whoever is behind the Honey Badger account is killing it. Well, attempting to kill it, if you know what I mean. Earlier today the cobra tweeted that it was on it’s way to Ellis Island and shortly there after the Honey Badger checked into The Statue Of Liberty on FourSquare. Of course that’s the wrong island, but that’s an A for effort regardless. And then… the drama! 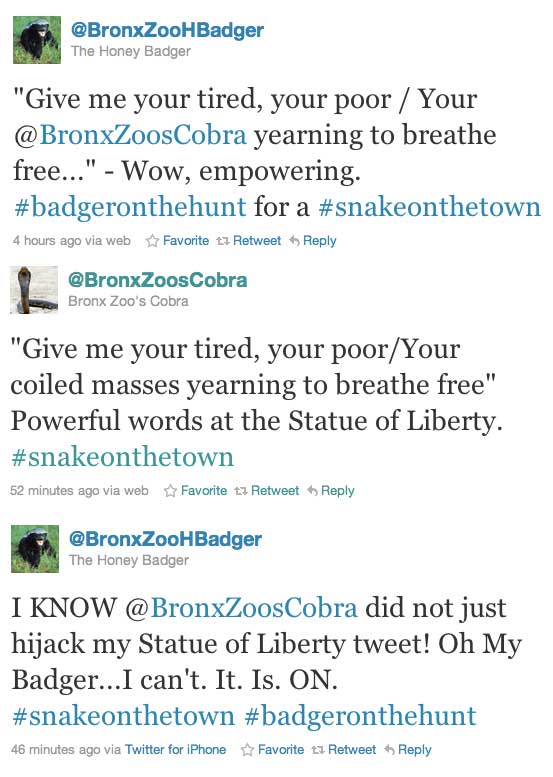 The Honey Badger is obviously following the Cobra but thus far the Cobra seems oblivious to the Badger’s existence. Regardless, this is completely amusing to watch play out and a tiny news story has basically turned into an ARG (Alternate Reality Game). If you look at the replies to those accounts the engagement is insane and there are over 150,000 people already following the Cobra. Remember, this is a pretend account for a snake that no one even knew existed a week ago. I actually think the Honey Badger account is the funniest of the bunch, but the existence of the cobra’s account willed that into even happening. A company would kill for this kind of reaction to one of it’s brands, but that’s sort of the trick here – this is just fun, and exists only to give something to people who are interested, which is why people are interested. I love it.

Spreadshirt is missing the point

Open Data: Now More Than Ever