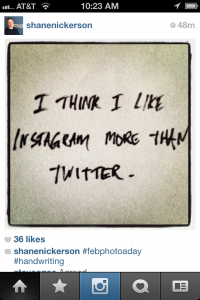 This popped up in my Instagram stream this morning thanks to my friend Shane Nickerson and until I read it I never would have thought it, but instantly agreed when I saw it. Which if you know me is shocking because I’ve been a very long time proponent of Twitter and vocal hater of Instagram. So this is a pretty crazy flip flop. But here’s why I think I suddenly agree with a statement like this:

Twitter used to be about people. It used to be about conversations. Now it’s about news, it’s about broadcasts. And just just from a “who is using it” standpoint – businesses grow and that’s a good thing, but from an approach from the corporate level. As a Twitter user I used to feel like Twitter was paying attention to how I was using the site and trying to make that better, and now I feel like I’m being told how to use it regardless of what I want. I don’t want to hate on twitter, it changed so many things for me, it’s just pretty clear the direction it’s heading isn’t that interesting to me anymore.

Instagram is what Flickr mobile should have been. I hated Instagram initially because I felt that I could already do everything it was offering, and better, on other services. No high res images? GTFO! OMG another bullshit filter? Weak!! I resisted for a long time and then finally decided to try it out just because I kept hearing people talking about the connections they were making there. And then BAM! I got it. Instagram isn’t about the photos, it isn’t about the resolution, it’s about sharing slices of your life with your friends. It feels incredibly more intimate than Twitter does these days and more and more I find that’s what I’m drawn to. The fact that there is no web presence where people can just sort through your photos is actually a plus. It’s temporal. It’s fleeting. And it’s the social connections that tie it all together.

On Instagram I’ve connected with friends I haven’t talked to in years, met new ones and been introduced to another slice of the lives of current friends. With Twitter I rarely talk to friends anymore, and don’t feel like I have any real connections there.

[I posted this earlier on my Google+ account but wanted an archive of it here for future reference and stuff as well.]

Head in the clouds