‘Brunch Of The Dead’ Officially Released 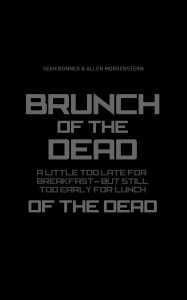 So I’ll start this off by noting that Brunch Of The Dead is currently FREE in the Amazon Kindle store and will be all week, after this week the price skyrockets to $2.99.

Now that that is out of the way…. Brunch Of The Dead is a few things. It’s a short story around 5,000 words about old people and brunch and zombies that has been 12 years in the making. That’s trumped up a bit, it was written initially 12 years ago when my friend Morgen and I used to skip work to hang out coffee shops drinking coffee and trying to make each other laugh with crazy stories. This was one of the few we wrote down, but a serious lack of confidence caused us to shelve for most of that time. About a month ago I dug it out of the archives, still thought it was funny and Morgen and I decided to put some time in reworking and polishing and then publish it. Which we did. Hence the “official” in the subject up there.

It’s also the first piece of fiction writing I’ve ever published, which is a bit nerve wracking. More so than I expected. I really enjoy fiction when I’m reading but I have a horrible time writing it. It’s one of the things I want to do more than anything in the world, but whenever I try I end up writing something that actually happened. I’ve written before about how that scares the crap out of me. I’ve also written before — countless times — about the value of just going for it. About how if you don’t try you are 100% assured to fail. About how anything creative you produce can find a handful of people who enjoy it. So I decided to take my own advice and jump in.

I’m not going to go so far as to say it’s “good” but I will say that I know exactly what happens in it and I still enjoy reading it, and it still makes me laugh. And what I will go so far as to say is that it’s done. I actually made it, and actually shipped it. Which is a huge step for me. And somewhat amusing that it took 12 years for 2 guys to publish a short story that could basically be told verbally in 10 minutes.

But it’s out and that feels awesome. I highly recommend to anyone who is wavering on finishing/publishing something -just go for it.