The rule of thumb for tools & stuff you carry around everyday is “two is one and one is none” which basically means you lose things, batteries die, stuff breaks at the wrong moment, etc and if you only have one of something and you need it in a pinch and something goes wrong you are out of luck, having two always gives you a back up plan. I’ve been a fan of this rule for a number of things, not the least of which is flashlights. People who don’t carry flashlights can’t understand why you need even one, but once you get used to how handy they are you can’t imagine not having one within arms reach at all times. For my purposes I’ve settled on the CR123 + AAA combo. That is, a super bright yet compact and pocketable primary light driven by a CR123 battery, and a smaller yet capable AAA light on my keychain. It’s a set up that works great for me. Some people opt for two lights that use the same battery size or something but I tend to think if you are going to have two they should be different enough to justify themselves. But anyway.

I’ve had an original Arc AAA light on my keychain for over 6 years which I bought after doing a ton of research. That thing is SOLID and it’s served me really well – still works perfectly. Unfortunately the other day I noticed that the keychain hole had almost worn all the way through. I had a titanium split ring in there which might have caused the problem, titanium being stronger than the aluminum the light is made out of and all. I don’t think it’s a problem with the light and blame it much more on my own heavy use. In fact, because I like the light so much I’m not ready to just trash it and may make a weekend project out of coming up with a new way to attach a hook. But in the meantime, I need a new light for my keychain.

Perhaps I’m feeling a little saucy at the moment, but I felt like going way out to left field and abandoning the traditional tacti-cool aircraft aluminum or titanium as a material and trying something new. I’ve been into copper recently – we have some copper cups at home and I got a copper pen that I’ve been enjoying, so when I saw that County Comm had an all copper version of their Maratac AAA I was in. That light regularly gets great reviews on the nerdy flashlight geek websites  and at under $50 I didn’t even really have to think about it. 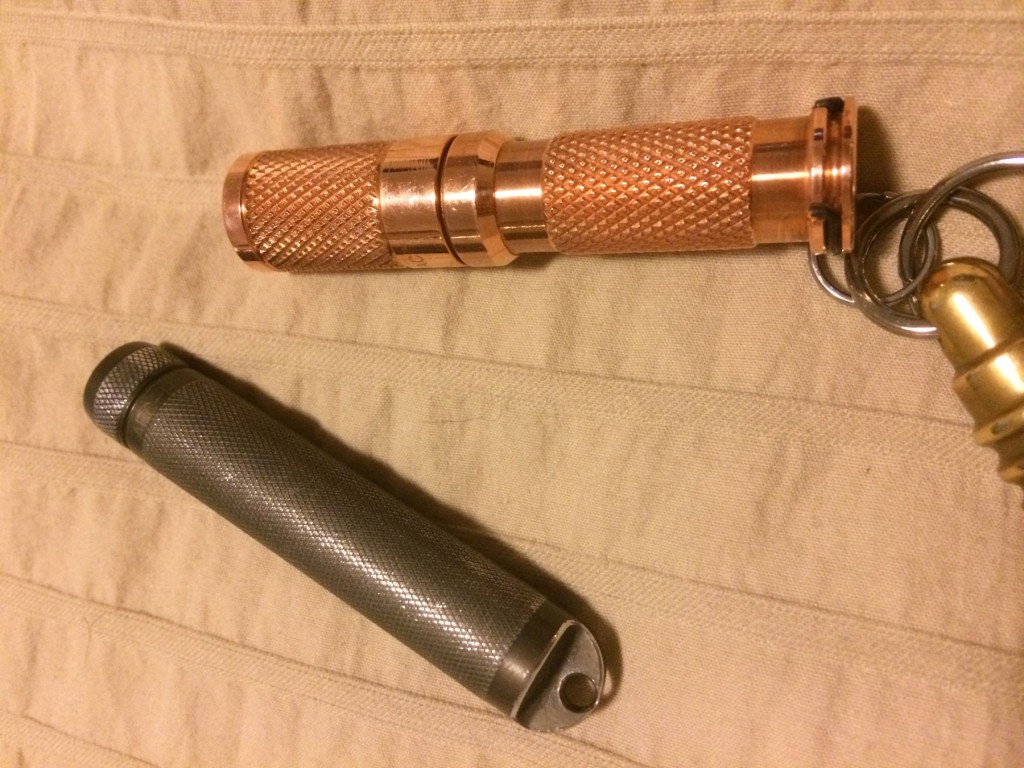 Being a pure element, copper has some unique properties and should tarnish quite interestingly after carrying it for a while. My first impression after getting it is that the little wire used to create the keychain loop may be a problem, but only time will tell. It has 2 brightness levels instead of the on/off that the arc had, and is considerably brighter in the higher setting, though that comes at the cost of shorter battery life.

Since apparently I’m susceptible to suggestion or easily marketed to when I’m in the buying mood, seeing that they just released an all copper CR123 as well, also for under $50, I gave in and got it. Maybe I’m just a sucker for matching stuff. I have these crazy conversations with myself where I try to justify this completely ridiculous behavior – where I blatantly know I’m trying to fool myself or make myself feel better about doing something I shouldn’t be doing, and then I do it anyway. I’m all “Dear Sean, this shit is going to happen wether you like it or not so you better come up with a way to be OK with it. Love, Sean.”

I have the U1 version of the Sunwayman V10r which is no slouch of a light. Solid titanium, a cool magnetic brightness control and compact as crap. I’ve had it for about 5 years and it’s still a fantastic light. So I have no good reason to replace it at all. Except, you know, this other one is copper. And I suck.

The Maratec is smaller, but it’s heavier because copper outweighs titanium by a lot. And the Maratec has 3 modes – low/med/high where as the magnetic swivel ring on the Sunwayman is basically endless brightness control, however I think the Maratec tops out a bit brighter because it’s all new tech, were as the Sunwayman is fairly obsolete all these years later. The CR123 size light is where manufacturers really flex the new electronics, new LEDs, new reflectors and stuff so generally any higher end new CR123 light is going to beat the pants off one just a few years older. So I’ll carry the Maratec for a while and see how it goes.

But for under $100 I got two brand new flashlights that that should last many, many years to come – not bad.

The Year Of Less: Day 2 – A Numbers Game