I was sitting in the audience at TechCrunch50 in 2008 when FitBit was announced and ordered one immediately. If I had money to invest in things I would have been banging on their door – I got the concept right away and knew it would change everything. I’ve had every single model they’ve released and swear by it – just knowing how active (or not) you are, give you context that might otherwise be lost. And I saw that, one days when I’d start feeling sluggish and worn out I noticed I wasn’t moving around much. If I felt awesome and ready to take on the world, surprise surprise – I’d been moving around a lot. After doing this for a little while I could tell if I walked a certain amount each day my overall attitude and general feeling was way better. I wasn’t using it for fitness as many people do (quite successfully) but just as an extra data point of something that I knew improved things for me. My only complaint with FitBit is their charger dongles which I always lose or forget when traveling which wrecks my stats anytime it happens – otherwise I love it.

And of course, other companies and other devices followed tracking all kinds of different things to give people that kind of feedback. Above X you feel good, below X you feel bad – so here’s an easy way to know where you are so you can step things up if you need to. Hell, we even have one for our dog to know if we’ve walked her enough.

Recently, spawned by a conversation on my mailing list, several people told me they track other things in their lives as well. Not just the  physical stuff, but mental and emotional too. How much time each day or week were they spending with their family, were they spending alone, were they reading, having sex, meditating, traveling, etc.. whatever was important to them, and keeping track of it. To great success I might add. This seemed incredibly obvious to me and I didn’t know why I didn’t consider it earlier. If I know I feel better if I walk 10,000 steps in a day, and I have a device/system to remind me to do that, why couldn’t I think of other things that make me feel better and use a system to remind me of those? I’m not talking about “remember to floss!” kind of things -because while those are great for you (and me) they don’t really impact day to day mental well being.

Which is kind of the thing here – I do better stuff when I’m happier. I’m more fun to be around when I’m not depressed. I get things done, things that I’m proud of, when I’m in a posi state of mind. So if I know that I need X, Y and Z to keep me posi, I shouldn’t hesitate to track those things to make sure I’m where I want to be – or at least to help me understand why I’m not where I want to be today.

I didn’t want to make a todo list, because I didn’t even really know what I wanted to track. But I had to start somewhere so came up with a random list of things questions for myself and answered them. In an ideal world how much “alone, just me” time would I have each day? In a less than ideal world, what’s the minimum I can get by with. How many day trips with my family do I want to take each month? And so on. I sent the list to Tara too, and we compared notes. Seemed like a good place to start. 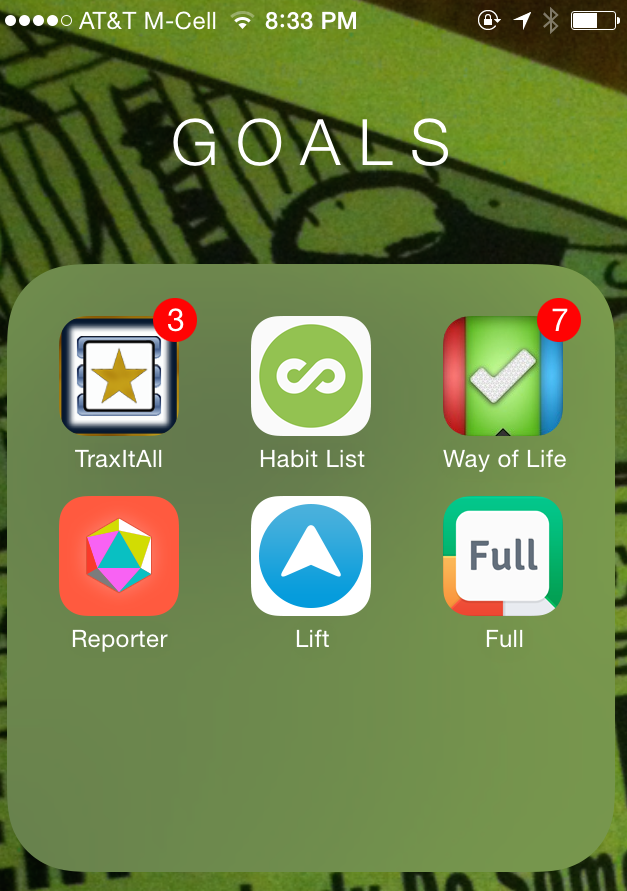 But how to track this? I knew if it was too difficult I wouldn’t do it so it needed to be effortless – as much as possible at least. I thought an iPhone app was likely the way to go, but which one? I asked on line and a few people told me about one called Reporter. Other people suggested Lift. I searched on the iOS app store people seem to like TraxItAll, Habit List and Way of Life. At the last second I added Full to that list as well and after 2 weeks of trying to use all of them, Full has definitely become my favorite. I thought I’d include some of the how and why here in case anyone else wants to try this on their own as well.

Each of these apps is different and depending on your specific needs you might like a different one than me, or something might suit you better, but this is what I found.

I found Reporter to be annoying, always interrupting me and asking me stuff I didn’t care about and no easy way to log what I did care about. This was probably the odd man out in the whole list too, it’s really not designed for this kind of thing and I feel bad complaining that it’s not good at it. It’s like biting into an apple and then throwing it away saying it’s the worst hamburger you’ve ever tasted. It’s probably awesome at doing what it was designed to do, which isn’t tracking your own set of habits.

Judging from the recommendations Lift is by far the most popular among my circle of friends, however that circle of friends also includes several investors and advisors to the Lift team so that could be a little bit of bias showing through here. I’d tried Lift out when it first came out and couldn’t get into the habit of it, also the aspect of goals being public weirded me out. I know that there’s huge value in encouragement from your peers and there’s also a way to make goals private but at the end of the day there were just too many steps and it wasn’t geared towards what I wanted. Even though many of the items I wanted to track already existed in their database which means other people are using it for that, it just didn’t work for me. Lift seems ideal for someone who wants to remember to floss every day, or to study a new language and benefits from encouragement from the community.

TraxItAll is the most full featured app on this list by a long shot, with all kinds of charts and data and different ways to look at that data. I was really excited about the charts showing you longer term trends. Their site is full of tutorial videos highlighting all that can be done with it, which is great, but is also part of the problem. It’s just too much. Every step has 5 different options and different choices and classifications and reminders and it’s not intuitive at all. It’s probably great for some people and some things, but not for me.

I really liked Habit List and had I not found Full this would have likely been my choice, though WayOfLife also worked quite well. These two are fairly similar but Habit List is much cleaner and that simple design goes a long way. WayOfLife felt super dated, though the week or month view of what you’ve done or not done is very nice to quickly get an idea where you stand, which Habit List lacked only showing you where you stand today on your monthly goals so you know if you need to pick up the pace on something or if you’ve been really good about something else and have extra in the bank. HabitList scored a little higher than WayOfLife because of ability to say “I want to do something 10 times a month” and then track what you’ve done, 3 times last week, 4 this week – I’m ahead of the game! And HabitList does that math for you, knowing when to remind you to do something based on what you’ve done, and when not to. So it’s not a hard and fast “Do X every day” or “every other day” or whatever, which is really nice if you are tracking things with flexible timing, like if I want to go the park with my son twice a month, I don’t really care which days that happens on, so long as it happens. WayOfLife didn’t do that, and didn’t have those goals, just either yes or no (or skip) and then a big view so you can see how often (or not) you’ve done something – but you have to do the legwork to see if that’s on track with your goal.

Full turned out to be a happy medium of several of these things and just enough of what I needed. Super clean and simple gesture based interface, swipe one way to say you’ve done something, swipe the other way if you accidentally said you did when you didn’t. Running tally of how many times you’ve done that thing next to how many times you said you wanted to, and color coding to know if you are on track, ahead of the game or need to catch up. As well as a chart view of everything at once to see where you stand. Really simple and lovely. This is what I settled on and what I plan to use for the coming weeks and months, in hopes that I can get the same kind of idea about the rest of my life that I got about my activities thanks to FitBit.

[I also posted this on Medium]

It’s true, we were married by Optimus Prime!