I’ve lost count how many times I’ve started to write this and then given up and deleted everything I’ve written. I try to write something and then feel like I need to preface it with something else so that people don’t jump to conclusions and then feel like I’m second guessing myself and so on and it ends in a select all and a delete. So I decided to just tell some stories instead which may explain how I’m feeling better than if I just tried to write about that.

I’m vegan. Many of you know that and know that I’ve been vegan for approaching 25 years now. More than half my life. In my ideal world it would be illegal to kill animals for food, but I’m very capable of knowing the difference between my ideal world and the real world, and the difference between the two. I’m able to understand that just because I want something really badly doesn’t mean it magically happens. I decided a while ago – after years of taking the opposite approach – that it was more productive to lead by example and answer people’s questions when they took notice and asked, than to attack them and try and force them to change. That’s just me.

Additionally, I like to talk to people who have differing opinions than I do. I find people who always agree with me boring and like to discuss the merits of my positions with people who aren’t convinced. I like to be able to sharpen my take on things on be persuaded otherwise. I count many people with drastically different world views in my circle of close friends and I appreciate that they put up with my hassling them about how wrong I think they are. And they do the same. I find myself agreeing and disagreeing frequently with my friends on the right and the left.

I don’t fit well into any category, which I think helps me with perspective. I try to look at issues on their own and not based on which politician supports and decries them. I know this isn’t a common position, but it works for me.

I have friends who were die hard Hillary supporters and friends who were die hard Trump supporters. I was neither. In the early days of the primaries I was backing Bernie pretty strongly. I said several times during that time that I didn’t believe Hillary could could beat Trump and I really didn’t want Trump to win. Once Hillary got the nomination my position remained the same. I didn’t want Trump to win, but I didn’t think Hillary could beat him. I could write many long winded think pieces and hot takes on why I felt that way but it’s kind of moot at this point so I won’t waste anyones time. I’m in a few private slack teams and private email lists. Some of these are very political. Some of these didn’t take kindly to someone not jumping on the party line. I’m not, nor have I ever been a registered Democrat so party lines mean nothing to me. I vote for who I want to based on their own merits. So while Democrats were expected to all get behind Hillary, I maintained that hopes and dreams aside, that while I didn’t want him to win, I didn’t believe she could beat him. In some of these groups I was called a Trump shill. In some of these groups I was called a Bernie Bro and a misogynist. So I left those groups.

I knew both of these groups couldn’t be right.

Again, I’m weird so I recognized that what I wanted to believe and the outcome I wanted might not have been the same thing as what realistically might happen. This was not a welcome opinion.

The echo chamber was in full effect. All these people were only listening to people who agreed with them, and who were saying things they wanted to believe. Most of these people wanted nothing to do with anyone saying anything other than that their candidate was going to slay it.

Then the election happened.

My friends who were backing Hillary are largely in shock. They keep saying things like “How did this happen?” and “How could we have been so wrong?” Someone who called me a Trump shill for saying Hillary couldn’t beat Trump asked me with a straight face “How could anyone have seen this coming?”

Tonight there was a protest in Los Angeles, condemning the pick of Steve Bannon as Sr Advisor to the president. I think Breitbart News is very good at stirring people into a frenzy and very bad at reporting the news. I think picking the guy who runs that for a position equal to Chief of Staff is dangerous. I wanted to go and take photos, my wife Tara wanted to go and hold up a sign. Ripley, my 6 year old son also wanted a sign but I’m not a fan of indoctrinating children to anything, and didn’t want to write up a political sign that him carrying around would suggest he was making the statement. I told him what the protest was about, and asked him what he wanted on his sign. I told him he could put anything that he wanted. He wanted a happy sign that would make other people happy too, so he decided his sign should say “I Love Cats.” I thought it was great. On the other side he decided the sign should say “It’s past my bedtime” because the protest was at night and he would be tired and this would show people that even though he was tired and it was late he was there with them. I loved this sentiment. We drew up the signs and headed out.

Tara and Ripley joined some friends of ours on one side of the crowd and I walked around taking photos. The mood of the evening was largely positive, people were protesting something they were upset about but the crowd working together. There were the expected “Ban Bannon” and “No KKK” signs, as well as some more original and light hearted ones including one older lady with a sign that read “I’ve been protesting this same fascist shit for 50 years!” and someone with a trans flag and a sign saying “This isn’t the kind of dick I wanted.” Anytime I was near my family people were taking photos of my son and his sign, with many people telling him they loved it and it was the best sign there, which made him smile big. 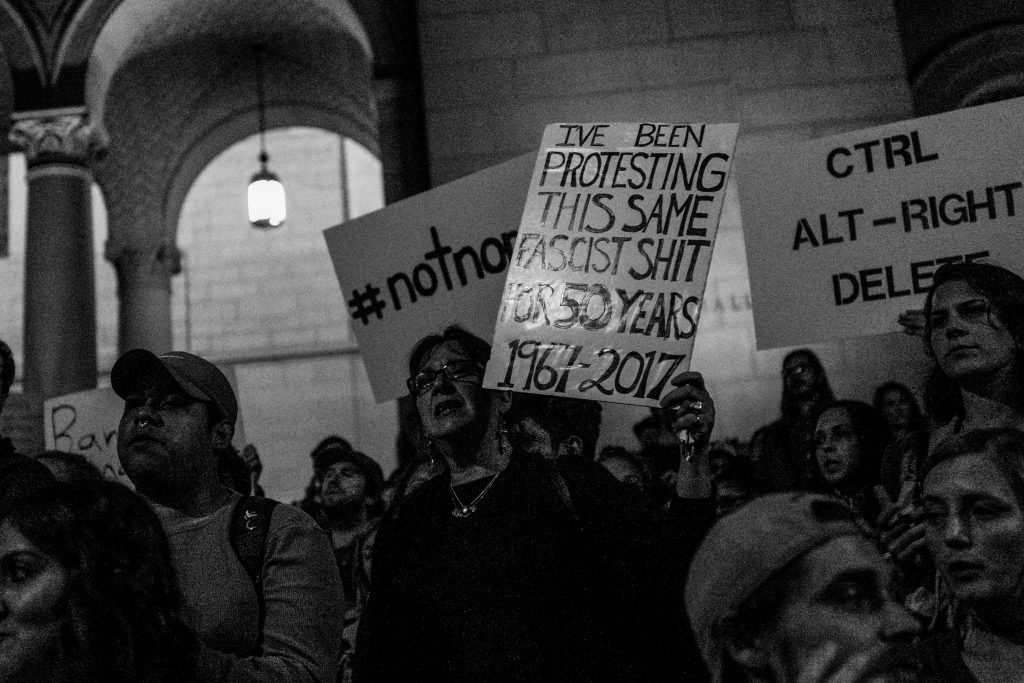 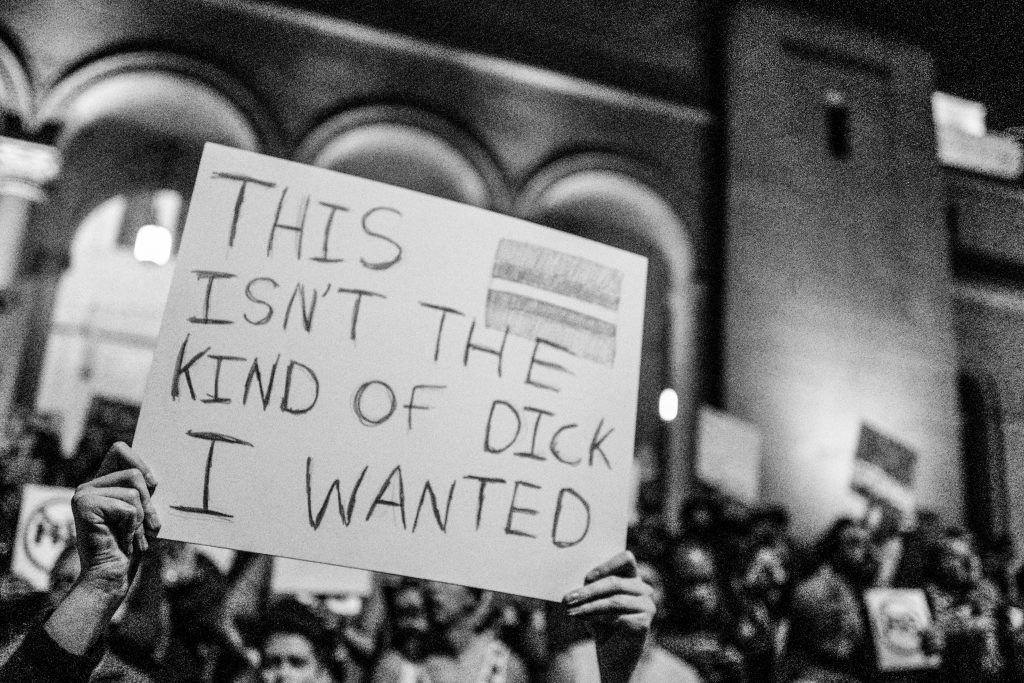 He got in on the chanting, memorizing the rhymes. He waved his sign for people and smiled when they took his photo. This was his first protest and he told me he really enjoyed it. He said he loved seeing all the people together, hoping for the same thing.

By 8:30 it was in fact well past his bedtime and we decided to leave. Tara and Rips started to move to the edge of the crowd and I was behind them. As I turned to leave two younger women tapped me on the shoulder. I only spoke with them for a moment but I’d guess they were late 20’s-ish.

“Hi, can we talk to you for a moment about your son’s sign?”

“It’s very cute, but we are concerned that if someone sees it and takes a photo it will misrepresent the feeling of this event.”

“Lots of people have taken photos of it all night, everyone has been enjoying it”

“That’s the problem, it’s sending the wrong message – I Love Cats? This isn’t about cats”

“He’s 6, that’s what he wanted on his sign. I’m not going to put my politics on a sign and make him carry it.”

“There are lots of kids here with political signs”

“Sure, that their parents wrote for them”

“But what will people think if they see this sign”

“Are you really upset that a 6 year old isn’t protesting correctly?”

“You wouldn’t be saying that if you weren’t a white man, maybe you should meet an immigrant and find out how they feel, you are mocking the serious people here… Racist!”

I turned around and to walk away and one of them punched me in the back of the head.

I kept walking, they shouted something but I wasn’t listening anymore.

In the 5 minute walk back to our car, at least 10 more people said “Love that sign!!”

As some of you know, my wife is an immigrant.

The sun will rise tomorrow. 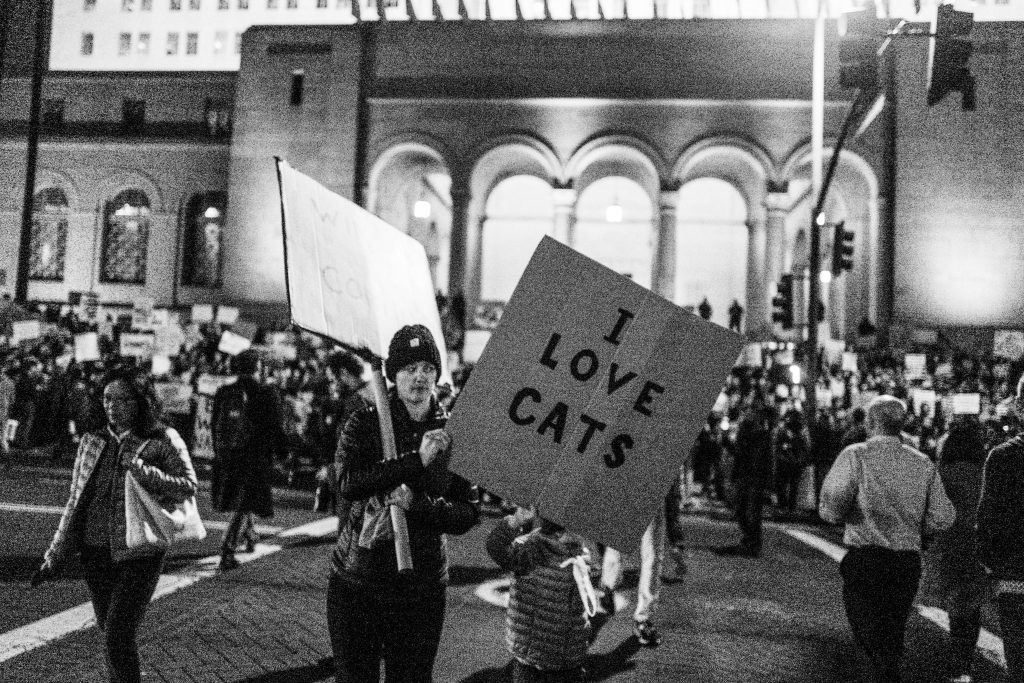 (A version of this was sent out to my mailing list last night. It’s the first thing I’ve sent out since the election. Feel free to subscribe if you want. All photos by me, I’ll probably post more on instagram as well.)