Taking a ride on Mastodon

“All of this has happened before, and it will all happen again.”

I’m trying out Mastodon, you can follow me on Mastodon.xyz  [Aug 2018 update: find me as @seanbonner on counter.social] – if you haven’t seen it yet Mastodon is the latest iteration of a very long line of wannabe Twitter replacements. Pownce and identi.ca and diaspora and app.net and ello and peach and now mastodon, oh my. That sounds like a skeptical way to start this off but as one of the first 140 people to join Twitter more than 10 years ago, who has written about the service a lot and has been disappointed with it recently to the point that I keep threatening to leave – I would love a better Twitter. Of course I would just love Twitter to be better, but if I’m honest about it they have had their chance again and again and continue to blow it, so if someone else can do it better then I’m all for that. So every time the next Twitter replacement shows up I participate in the experimentation and after a while you start seeing the same patterns repeat themselves. People keep reinventing the wheel, and keep making it square each time.

I want to be believe.

I’d heard a lot about Mastodon recently though admittedly it took me a while to realize people weren’t talking about the new Mastodon album, but Sarah’s Motherboard article clarified that for me. Mastodon boasts an impressive list of attributes right out of the gate, someone has obviously been listening to a lot of the complaints about Twitter.

Say no more! Selfishly I wanted to secure the username I use everywhere else on the web, and this sounded like a good start so I decided to join and check it out for myself only to find that it was closed to new sign ups. 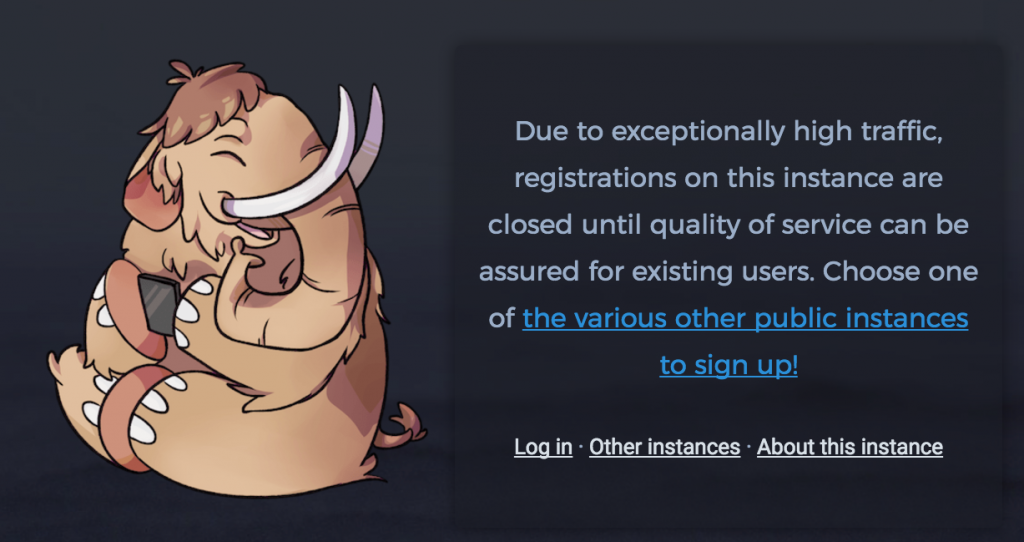 But one of Mastodon’s features is that it’s open source and federated, so while I couldn’t sign up on the main site Mastodon.social I could sign up on Mastodon.xyz which I found on this short list of other instances and I picked it because at the time it was one of the only ones that had the word Mastodon in it which made me feel like it was somewhat more official. That list is getting longer, and here is an even more exhaustive list showing just how many instances there are already out in the world, and this is growing quickly. This is important and I’ll explain way in a moment.

Let me clarify this a little, because it took me a while to get it myself. Each Mastodon “instance” is a wholly separate installation of the Mastodon code.  Think of how you can install WordPress on your own server or something like that. BUT, because it’s federated, they all talk to each other to have common timelines easily allowing someone with an account on one instance to follow and talk with someone with an account on a different instance. The immediately obvious benefit here is that this is completely decentralized, so one server can go down and Mastodon stays up. The less obvious hiccup with that is because each instance is completely independent each one has it’s own rules, or lack there of–and each instance is subject to the whim of whoever decided to set it up in the first place. Some instances are moderated, some aren’t. Some instances take a strong stand against certain kinds of speech, others don’t. But because of the federation, they all come together, right? Wrong. Each instance can also decide if it wants to federate with all the other Mastodon instances or with only select instances. So you and your friend can both be on Mastodon, with accounts on different instances and you can talk to each other, but you might be able to talk to some people your friend isn’t able to. Or more concerning, any number of things may cause other instances to stop federating the instance you or your friend are on cutting you off from each other. This is a huge problem, and one we’ve seen with with other attempts at this and I’m surprised is a mistake being repeated.

You may assume, as I did, that this isn’t really a concern because as noted earlier there are lots of other instances so you should be able to just create an account on another one and be back up to speed. And indeed Mastodon offers account detail export & import to make this easy. But again, what isn’t so clear is because each instance is independent, so is each account on each instance. Meaning just because you secured your favorite username on one instance doesn’t ensure you will get it on another. I’d assumed that upon joining I could tell people “I’m @seanbonner on Mastodon just like I’m @seanbonner on Twitter.” That turns out to be incorrect. I’m actually @seanbonner@mastodon.xyz and if I want to be @seanbonner@mastodon.social or @seanbonner@mastodon.cloud or any of the other instances then I have to create separate accounts on each of those, and there is no way to sync them. This also means that some other Sean Bonner can go sign up as @seanbonner@anothermastodon.instance and judging by how much email I get from other Sean Bonner’s who apply for jobs and join dating sites and register bank accounts without knowing what their own email address is, that is going to be a huge problem at any kind of scale. This is the biggest flaw in my opinion because without the ability to claim your identity across an entire service there is huge potential for confusion and no way to embrace it as a home.

This is subjective, but 100% of the people I’ve talked in in person about Mastodon in the last few days have made a comment about how they should go lock in their username now, and when I’e explained the above they’ve lost the motivation to go check it out. They really should be using some shared ledger to have global usernames across the whole federation.

Going back to the import/export thing for a second, it’s true you can export your info to make setting up on a new instance easy–however you export only your following list, not your followers. So if you create a new account you are back to zero followers. Pointing out this problem on Mastodon is however assured to get you a lot of replies from accounts with anime avatars dismissing your concern and equating a Mastodon account with an email account. Almost like a talking point.

This is a quite flawed analogy for a social network. Your email address is not your public identity where as your social media accounts often are. And while it’s true that no one would try to lock in the same name@email.server for every email host out there, it’s also true that there haven’t been massive lawsuits and fights over email addresses the way there have been for social media account usernames. Email is inherently private and social media is inherently public. I’ve had people call me @seanbonner to my face, or introduce me to others that way, but no one has ever referred to me as my email address. I think it’s safe to say anyone making that analogy here really hasn’t thought it through.

There’s also the lag where it seems some instances don’t see posts for many hours which creates a weird reply stream, but that’s more likely attributable to the recent exponential growth and I expect will be solved.

I sound like I’m hating on Mastodon but I’m really not, I wouldn’t have bothered to write any of this if I didn’t care. I actually really like a lot of it and have high hopes for it, and I say all this because I’m concerned that these are fatal flaws that will prevent it from really taking off.  This piece on The Verge dives deep into the genesis of Mastodon and the creator’s motivations and goals. He’s very clearly trying to solve his own problem, which is where all really good ideas come from. Unless he also tries to solve some other people’s problems, I’m doubtful how much of a future Mastodon will ever have.

Of course I’d very much love to be proven wrong there. I still want Twitter circa 2008 back.