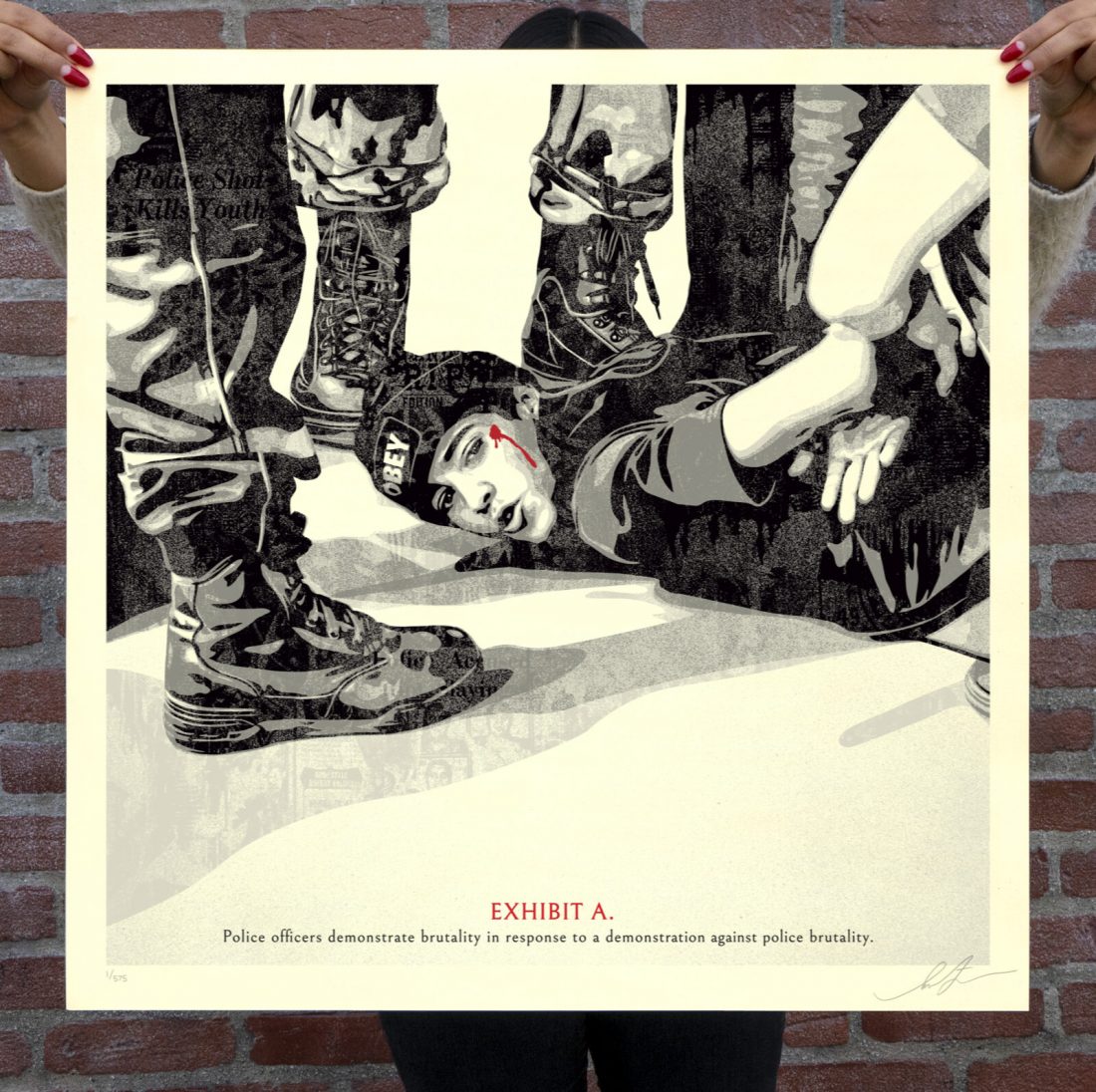 Announcing my Collaboration with Shepard Fairey

I’m beyond excited to announce this collaboration with my old friend Shepard Fairey. As some of you know I built the first version of obeygiant.com way back when and have spent countless late night hours with Shepard in various cities climbing on rooftops for [reasons]. I’ve shown his work in my gallery, he’s shown my work in his gallery, but this is the first time we’ve collaborated on a piece of work together. This is my original photo the work is inspired by:

My work is observational, not documentarian. I try to capture moments, feelings – less how things are, more how I experience them. Years ago, while in Paris, I came upon several heavily armored cops standing over a kid in a t-shirt who they were detaining, forcefully, aggressively. A blatant and grotesque display of the imbalance of power which reminded me of similar situations my friends and I have experienced first hand all too often. Of course, sadly that isn’t a unique experience. Shepard wields his art like weapon, relentlessly fighting for for a better tomorrow. With this image, I’m honored to have the chance to provide some ammo for that fight. Shepard’s voice has always been thoughtful and poignant, as an artist and as a friend. This collaboration gives an amplified voice to a silent image, injecting an enduring message into a fleeting moment.

Shepard adds:
Punk rock ignited a lot of creative and philosophical things for me, and punk principles continuously remind me that speaking truth to power and questioning authority is paramount in life. The Dead Kennedys, The Clash, Black Flag, and the Circle Jerks are just a few of the groups that referenced injustices such as police brutality and abuse of power in their songs, inspiring me to speak out about the same subjects through my art. I have made a lot of lasting friendships through punk rock and its cultural offshoots. One of those friends is Sean Bonner, who began ordering my prints in the ’90s while he was art director for punk label Victory Records. Sean designed the package for the Bad Brains “Omega Sessions,” among others. Sean is a great designer, writer, activist, and photographer. Sean and I have worked on many projects together over the years, but this is our first art collaboration. I love Sean’s photography, and he said a while back, “if you see anything you dig on my Instagram, you are welcome to make an illustration based on it.” After the protests for racial justice and against police brutality this past summer, I remembered a pic of Sean’s I liked. It turns out the photo was taken in Paris but could be from any city where the police do whatever they want to people – NY, LA, Minneapolis, Moscow, London, Berlin, etc. To me, Sean’s image conveys the fairly universal problem that those who speak up for justice are often beaten down by the police for standing up. We need to demand accountability from those with power and demand consequences when that power is abused.

There have been consistent protests in France over the mistreatment of refugees and the erosion of the social safety net for low-income people. Since Sean’s shot is actually from Paris and those French protests have been met with a lot of police brutality, we thought the poster should raise some money for a French charity called Les Restos du Coeur which provides services for the most marginalized populations. Thanks for caring!

I’m going to do a one time 12″x12″ printing of my original photo and I’m taking preorders for that now. Order at https://shop.seanbonner.photos/product/busted-paris

NFTs: All Power To The Artists