Mandatory Reading – How To Kiss 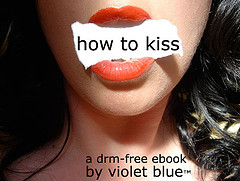 You know how sometimes you hear someone say something and you instantly think of a list of people you wish had been there to hear it with you? You know how sometimes you can just relay the story later and all is good, but other times there’s no way that works. That’s pretty much the reaction I had when I heard an episode of Violet Blue’s ‘Open Source Sex‘ podcast where the topic was kissing -specifically “How To.” I literally saw a scrolling list of people in my head (who I may or may not have ever kissed) who really needed to hear it, but preferably many many years earlier (before I may or may not have kissed them). But since I had no time machine, I forgot all about it. Luckily, I just noticed that Violet just released an ebook on the same topic. This I can recommend, and for $10, holy crap that’s way worth it. Really, you don’t want to be a crappy kisser. Yuck.

(And no, this isn’t just in-kind payback for her earlier flattery, though I’m totally flattered.)

The Year Of Less update #4 – A new exception