Earlier I was talking about the packing problem I’m facing with this trip. After much sorting and tinkering, I think I have it set and this is the majority of the stuff I need to bring with me: Click through to flickr on that one to see notes on what all that crap is. I think I’ve pulled it off, as here’s most of it in my regulation carry on sized roller bag: Missing from that is my laptop and a few related electronics that will be in the messenger bag I’m brining that I hope to be able to jam into the larger bag when I hit Heathrow and they start enforcing their one bag per person rule. I haven’t done the final zip up yet, but I’m fairly confident this will work.  I’ll be buying almost all toiletries when I get there, and wearing my larger jacket on the plane so as not to worry about packing it.  Guess we’ll just have to see how well this works out…

Jason posted this to Twitter, and it’s well worth watching. It’s Steve Jobs talking about dropping out of College, getting fired from Apple, and life and death.

Watching it I’m reminded of a slogan my first roommate Jon Resh had on his wall in our little Gainesville apartment. It said “Someday you will die, live hard now.” Good advice.

What am I walking into?

You know what is awesome to see right before getting on a flight that goes through London Heathrow? How about that since Thursday they’ve lost over 15,000 pieces of luggage and are canceling flights left and right. Yeah. Sweet.

So this throws a kink into my already hectic schedule by making me have to completely reconsider what I’m brining. So here’s what I have to work with – I’m gone for two weeks, which includes Berlin, Vienna, NYC, a speaking engagement and a wedding. Flights go LAX->LHR->TXL then TXL->VIE then VIE->LHR-JFK then JFK->LAX. Checking luggage going through Heathrow(LHR) is now completely out of the question and while US flights allow 2 carry ons (one bag one personal item like a laptop bag) EU flights only allow one. To make this even more exciting the itineraries are not joined, meaning technically I have 2 flights that overlap, one that us LAX->LHR then LHR->JFK and a totally separate plan that is LHR->TXL then VIE->LHR. What this means is even if I could check luggage though LHR I’d have to get it from baggage claim in London and then recheck it to get it to Berlin, and with 2 hours inbetween flights that just isn’t happening.

So, I need one bag with everything for 2 weeks including all electronics. One possible solution is buying a lot of things there that I can leave, this will work for toiletries and things, and then doing the same in NYC including buying stuff for the wedding which I could then bring back to LA. Going to chew on this one and report back. With photos, of course.

Connecting and being social, or not.

I’m in the midst of getting everything ready before heading out to Berlin in a few days for re:publica but wanted to share a few thought provoking posts I’d seen in the last few days and just haven’t been able to comment on yet because I’m running around like a mad man. Let me preface this by pointing out that just before seeing these posts I saw a few people talking about Chatterous and found it to be a very interesting new take on communicating with those we want to communicate with. One of the interesting bits on Twitter is that as long as your page is public anyone can (and will) read it – and sometimes will bring those topics up to you in person. Sure this is similar to blogging in that you are putting it out there for everyone in the first place, but as we’ve talked about in the past blog posts are generally more thought out (unless they are mine) and Twitter posts are just spur of the moment conversation. While I used to have people I’d never previously met mention things to me in person that they’d read on my blog somehow “hows that project you blogged about last week going?” doesn’t come off as intimate as “Did they get rid of that guy who makes crappy lattes at your coffee shop yet?” – It’s not a good or bad thing, as much as it is an interesting look at the conversations we’re having in public.

So back to Chatterous, because of the more limited discussion radious, that kind of thing is being directly impacted. In a post called ‘All Hail Anti Social Media‘ Eric Rice pretty much nails it when he says:

Chatterous does not currently make a big deal about who you know, only who is present. This could reflect natural behavior. Someone coming and going has a much different feel than someone following and un-following.

Chatterous also makes the ‘chat’ (they call them groups), password protected by default (while providing outstanding interfaces to the service by way of web, sms, gtalk and e-mail). To me, it’s not so much to be private (I’ve published the password to my little slice o’ web chat), it’s more about discrete, off-to-the-side/background communication. While we’re being social, we’re being somewhat anti-social, but not broadcasting to the world everytime we blink.

I think this is a good direction. The functionality of things like Twitter are obviously important, and tailoring that to specific groups of people is the next locial step. In the real world you don’t simultaniously talk to every single person you know at once, so why should communication tools keep using that as your default audience? Which brings us to a discussion of who you know, how you know them and what really “knowing them” means. This is also not a new topic, but one that needs to keep being discussed until we make sense of it all, which I think we’re quite a bit far away from. Let’s keep looking at Twitter for a second as a good example. As of this second I follow 201 people and am followed by 1,406 people. Of the people I follow, the number of folks I’ve met in person far outweighs those I haven’t, but the ones I consider “friends” are definitely dwarfed by people I just happen to have met once or twice, but think are interesting for one reason or another. Looking at who is following me I see mostly people I’ve never met but probably follow me for the same reasons I follow people I haven’t met. This is perfectly OK, but it lends towards a skewed perception of who we are talking to.

Damien Mulley mentions this in relation to Facebook in his post ‘The social network is us‘. I was asking about this the other day because one difference with Facebook is you have to approve a connection, where as with Twitter anyone who wants to can follow you. This means you have to stop and think for a second about which of those folks you give that access too, and how you know them plays into that somehow for sure. Damien writes:

I don’t think I added someone to Facebook because I valued their input in some Facebook group we were both in or actually liked their taste in music after looking at their likes and dislikes on their profile. I more than likely added them because of an existing relationship even if it was a weak one. Weak ones being we were at a conference, I saw them speak or they saw me, they read my blog and feel they know me that way, we emailed each other once about something etc. etc. The social networks take any and all connections/relationships and lasso them into your network and sometimes they add great value to these connections but sometimes not.

Again, this brings more questions than answers but that’s kind of the point in having a conversation like this. It’s not so much about getting to the bottom of something and putting it to rest as it is seeing what’s behind the next door and where that might lead us. I’m excited to see people talking about this and really looking forward to what might come from it. 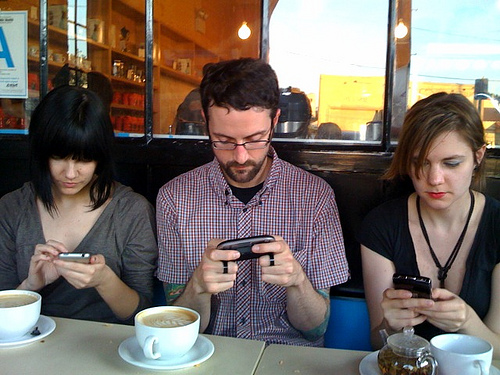 How to fuck off at work and not get caught

Having worked in a good number of offices and seen how they are run I’m pretty confident that most of what goes on in typical offices has nothing to do with getting work done. Not that people aren’t working or don’t want to work, but the way most offices are run actually prevent people from doing the work they are getting paid to do. I can’t count how many hours I must have wasted waiting for someone else to finish something crucial to a project I was working on that prevented me from doing anything further on it. Or how much time I spent trying to come up with descriptions for bosses about what I was working on so I’d have a good answer for them when they inevitably asked, rather than actually just working on what my job description said I should be doing.

Much of this combined with a few other things has let me to my current management technique that we use with Metblogs pretty effectively. That is set a goal and a deadline, and let the people working on it decide what is the best method to accomplish that goal and let them spend as much time on it as they feel they need to. They make their own hours and their own processes, we get the results we want. If we don’t get the results, we just ask different people next time. It’s painfully simple and works great for everyone. It’s the extreme opposite of micro managing and I love it. That said, I know most offices don’t do anything like it, and people are stuck sitting at a desk from ___ to ___ because some manager feels like that means they are working harder. That’s weaksauce and I feel bad for anyone who has to put up with it.

So, in efforts to make peoples lives better, I thought I’d throw out a few tried and tested techniques that will let the average person spend less time pretending to work and more time enjoying themselves. This will make the time the do spend working much more effective, will give better results to their bosses. Everyone wins!