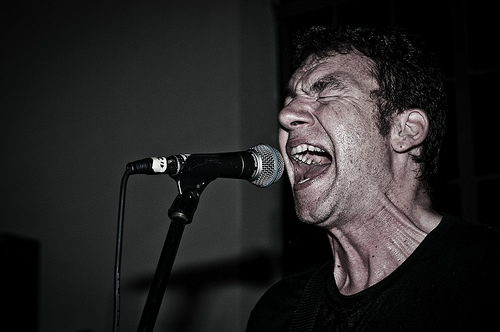 I’ve been leaving windows open and just playing youtube videos over and over again which is less than ideal. What I need is MP3s stripped from the videos that I can try to figure out which song is which and then start decoding the lyrics.

Here’s 5 songs from the show in Berkely, and here’s 4 from Los Angeles. I know there’s at least one song they played in both places that neither of us got, luckily it’s someone else on youtube did get it. And really, if you think that is nuts, take a look at this – 61 Thorns of Life videos have been uploaded this week alone.

Those shows are week in between and I think you’ll agree the one in Berkely (later) sounds a lot tighter, of course they played shows almost every night in between that I didn’t know about until after the fact. Seriously I would have gone and see every single one of them if I’d know the dates and locations ahead of time. Anyway…

I grabbed the audio off the above videos and tried to match them with correct song titles, some I didn’t know and made up so they could be incorrect. “Fuck or Fight” is definitely not the name of that song, but it’s lyrics to it anyway. ( DC people take note, Blake is going to be speaking at the modernist society event this month- someone should go ask. )  If anyone has any more, please let me know. I batched all those into one zip file and put them up on Rapidshare, feel free to grab them if you want.

Image above by Jason DeFillippo and tons more on flickr.

I dip my toe in this cold, cold life.