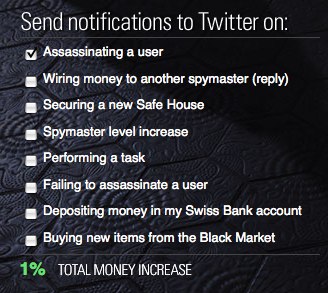 When Spymaster originally launched I instantly hated it because of the default set up to spam the crap out of your friends on twitter. I really hate anything that does that and to get spammed by something that was in private beta so you couldn’t even follow through if you wanted to was extra annoying. I started blocking and banning anyone who was playing it. I guess a lot of people had that problem and they corrected some of the issues and I kind of forgot about it. Recently Joi talked me back into checking it out and it’s actually kind of fun, even though it still rewards you for being a douche by spamming your friends. If you want to check it out, the very first thing you have to do is turn off all the notifications, it’s not worth annoying everyone you know for a small cash bonus in game. This is actually my biggest problem with it and I wish they would just kill that option all together. Other than that, here are a few tips and tricks I’ve figured out:

That’s just a few tips off the top of my head that I wanted to jot down for friends. If you have any others, please post ’em in the comments.