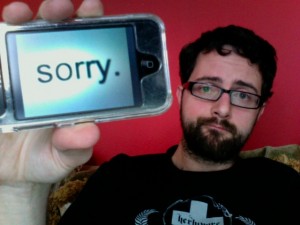 We’ve made some changes over the last few years in efforts to make things better but have realized that some of those changes might have done the opposite so we’re trying to change the changes. The truth is the changes we initially made were made with good intentions, some were at the request of readers and writers, some were heading the advice of business people who were giving us advice about business. Really it doesn’t matter who we were listening to because we forgot one of the main things that helped us get this whole network off the ground in the first place. We forgot the part about not giving a crap what other people thought and just building sites we liked and wanted to hang out on ourselves. We tried to please a lot of people at the same time which is always, always a bad idea.

Truly and seriously. And while we know we have egos, they aren’t so big that we can’t admit when we screw up and the only thing to do when you screw up is take a step back and try to fix it. So here are some of the things we’re doing.

Comment registration. This is the big one. So that I don’t sound like a total back peddling dick here I just want to explain something. Anonymous commenters can be mean and nasty. Some people don’t mind this, but some people are really really bothered by it. While we took a lot of things into consideration the main reason opted for registration was to make people accountable for what they said. And that actually worked, the overall quality of the comment content went up and the obnoxious and threatening comments went way down. But so did a lot of the less serious discussions that foster communities and truthfully it was a lot less fun. So we solved one problem but created another. And the new one is worse we think, so after a lot of thought we’ve decided to kill the registration requirement and open things back up to allow anonymous comments. We expect more name calling and some hurt feelings, but we’ll all just have to get over that.

Less ads. If you are talking about vegan ice cream or new bicycles then sure, more is better. But that isn’t true with ads. Personally, I hate leader boards. I detest them in fact. For years we resisted putting them on the sites no matter how often they were requested. With our last redesign we decided to give them a try. I wish I smoked crack so I could blame that choice on hitting the pipe but I don’t so I have to just accept it myself. It was dumb and they are ugly and so we are removing them. We’re also pulling off the skyscrapers because they are just kind of stupid too. We are adding a few smaller ones that are easier for people to buy on their own, but on a whole we’re going to have about 50% less ads on the sites going forward.

Sidebar what? With less ads comes more space. We’ve had a few extra things like “recent comments” and “blogrolls” on the sites since day one, but with the last redesign we thought “these features are so cool, we should give them their own pages!” which turned out to be a totally stupid idea because people were always asking us how come we didn’t have them anymore or suggesting we add them. So forget it, we’re moving them back into the side bar.

Global vs. Local. We started with a Los Angeles site because we lived in Los Angeles and wanted to read something like it. When we branched out to other cities we wanted to provide the same kind of thing for people who lived in those places. After a while some people told us that focusing on the fact that we were in so many cities all around the world was more impressive so we should make that more clear on each site. Again we listened when we should have ignored. We don’t really care about impressing anyone, and really to us at least saying we are in 50+ cities isn’t as impressive as saying we have a really awesome blog in Karachi or that the authors in Seattle have written some really thought provoking pieces and we’re flattered they chose to publish them with us. This is more of an attitude than a specific site issue, but we realize we strayed and want to get back to focusing on the local. And if we happen to be global too that’s cool.

There are other changes too but now we’re just getting nit picky so I’ll wrap this up here. In closing I want to say that to anyone we got in heated arguments with over the years, just because we were wrong doesn’t mean you suck any less. And that’s from the bottom my our hearts.

And now for something completely different…