There is nothing like packing for a trip to make you stop and think about what you really need. If you are new to it or not that good at it you’ll likely end up with way too many bags, which are filled with way too much stuff, and are a total pain in the ass to travel with. You’ll also likely return with things you dragged with you on your trip that you never once ended up touching. Traditional wisdom tells us it’s better to be prepared, to have things you might need just in case. That’s the worst kind of thinking for travel. If you are good at travel packing the things you bring will likely be multi-use, light weight, compact, and will all be used regularly.

For most of my trips I try to fit everything in one single carry on as well. Sometimes I break that into a carry on that will fit in an overhead bin and one that will fit under the seat in front of me just so I don’t have to access the overhead bin mid flight, but ideally that smaller bag should fit into the larger one when I get off the plane. It’s said that packing for a 2 week trip is easier than packing for a 3 day trip and I’ve found that to be very true. Over a week or more I find myself using the same things over and over again, where as for a single day or two I’m not sure what I might need that particular day. It’s because of this that I actually end up with more luggage on shorter trips. 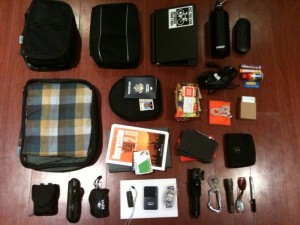 Everything I took to Japan, summer 2009 - I brought too much stuff.

I never thought much about the difference between a short trip, a long trip, and more extended long term travel until I read Vagabonding: An Uncommon Guide to the Art of Long-Term World Travel

(which I highly recommend) but that helped change my view of travel quite a bit. I’ve always thought of being home as the base, and travel bouncing out and back from that. Now I don’t feel so rooted and look at traveling more as the default, and stopping over at whatever I’m calling home at that point more like an intermission. I’ve been drawn to travel and the ‘open road’ as it were since the first time I spent a month in a van on tour with a band back in college, and since then have taken any opportunity to travel that has presented itself.

There is something about being out in the world that frees you from the constraints of possessing stuff. I’ve written before about how the things you own end up owning you and how we’d all be happier if we stopped buying crap so I won’t spend too much time on that here but thinking about some up coming travel has me chewing on a lot of this. With the exception of 2 or 3 months I spent in europe a few years back, the majority of my trips have been a week or two out somewhere and then back. Right now Tara and I are polishing off plans for a much more extended trip that doesn’t yet have a clearly defined end point.

Over the next year we have the opportunity to live (thanks to business or friends) for a month or so at a time in Singapore, Vienna and Paris. We’re also lucky enough to have professions that don’t tie us to any specific location for any set hours (I say lucky but that is really by design as well) and so long as we have an internet connection and don’t mind being awake weird hours all is well. So naturally we’re jumping at the chance. Of course our schedules aren’t free enough that we can just lump those next to each other, and at least I already have some other places I need to be at set times of the year so assuming some bouncing back and forth, the next 6 or 8 months might look something like this:

I say *might* because you know how things go, plans change and things get rearranged. There are also some other spots I’ve been meaning to go that might get added to the mix, but regardless, there’s a lot of travel on deck for the rest of 2010. Which means there’s some serious packing that needs to go on.

First of all there is the our place in LA. If we are going to be out of town for several months on end, there’s no reason to keep paying rent there. That means packing stuff into boxes, sticking it in storage and effectively making ourselves homeless. Yeah that is a big one to swallow but you’ll get past that (we did). But the more interesting thing to think about is what to take. A few things to consider that make this more interesting: The places we’re going have different climates, given the length of the trip seasons will change and warm weather will become cold in some places. One solution to that is to pack different things for different locations and mail ahead, but that’s getting outside of my point. I’m talking about minimalism and travel so lets stick with that.

Looking at a house full of stuff, it’s easy to get overwhelmed thinking about how much you need to bring. But the truth is packing for a month isn’t much different than packing for 2 weeks. And packing for 3 months isn’t that much different either. In any case, falling into the “I need this, I don’t need this, I need this” trap can be deadly. Instead start basic. What categories of things will I need, and what categories of things won’t I need. This is easily done by thinking about both what I’d be unhappy without, and what I don’t want to drag around with me. A few categories of things I need to be happy on a daily basis: My computer, location specific clothing (warm for cold, cool for warm), a bike, coffee supplies, camera stuff, and that’s about it. What don’t I need that takes up a lot of room at my house? Books. Artwork. Home entertainment system. Toys. That says a lot actually.

It’s an interesting mental experiment to take – what do you actually need on a daily basis to be happy? I surround myself with aesthetics and visual stimuli that inspires me, but the stuff on my walls today is the same thing that was there yesterday. When traveling the world around me becomes my decoration and it’s constantly changing and much more vivid.

How this will play out remains to be seen and there are a lot of factors to consider (not the least of which is that Ripley, who is almost 2 months old, will be joining us). On the pure packing standpoint I expect to have to bring more with me than usual, but I’m committed to that not making things more difficult. I try to avoid checked luggage which is easy for one person, not so easy for three. Instead of my one small piece of luggage I’ll likely use a larger stand up Zero Halliburton

case that I have and try to put most things into that. I’ll document some of these decisions as I go, but I’m already forcing myself to think about serious downsizing to allow for this to work smoothly. We’ll see…