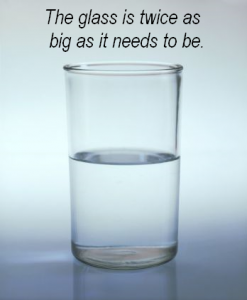 I got many replies telling me the content should be on my own site, however most of those replies did not happen on my site. They were tweets. Reblogs on Tumblr or comments on Facebook. Which is very interesting I think.

Then Google+ entered the scene and if you’ve been following me here for a few days you know I’m incredibly interested in both the very fast growth but also the incredibly active comment threads. I wrote a post that said nothing but “Hi” the other day that got 500 comments for crying out loud.

So there’s no question activity is focused in other places in many ways.

So back to the comment thread here I was talking about, someone noted that many of Scott’s links point to his own blog, rather than to the source of the topic (or artist, or whatever). Of course Scott’s blog itself points to the source with all right credits. To some people, this makes perfect sense as things like Twitter, Facebook, Tumblr, Google+ are seen as ephemeral (Scott says that himself in a comment) and that the real focus for his content is his blog. Those other sites are just kind of a heads up.

But it’s very clear that not everyone thinks that – how many people even have their own blog anymore? It’s pretty clear that to some % of people out there sites like Twitter, Facebook, Tumblr, Google+ are *not* simple avenues to get to the content, but in fact are the content. It’s a different thing, a different approach, a different perception. It’s the stream vs the archive. But there’s no question many people are giving up the archive in favor of the stream.

Scott asked in that thread “How often do you go back and try to find something that is several months old on Twitter? At least with my blog I have a searchable archive that works.” which is a totally valid point. I never search archives on Twitter. But now that I think about it, I don’t really search archives on blogs either. When I need to look up something I go to Google and let that point me to the best source. Even for my own writing, I find it better and faster on Google because sometimes I don’t even remember where a piece was published.

What do you think? Where should content live, and is the stream less valuable or useful than the archive? Or is it more? Or is it ever changing? Or is it just a matter of perception.

(side note: I wrote this on Google+ first, because that’s where people will see it. I’m copying it to my own blog as well, but I really don’t even know why.)