Sometime in summer, 1991 I guess? I was hanging out at Rob Sexton’s house in Tampa. He’d offered to teach me how to silk screen t-shirts and we’d ended up talking about records. He pulled out a box of I don’t even know what anymore, a stack of 7″s he’d traded for an equal stack of the recently released Slap Of Reality 7″. This was how you sold records then, you’d press 300 and then trade 10-15 at a time to other people for records they released and soon you’d have a mini record store, a distro that you could take around and see off one by one. The records weren’t important, the story was. Rob told me how pissed he was at the guy who sent him the records because he’d shipped the records in a box but hadn’t included any kind of note. In punk rock / hardcore at the time, this was an unparalleled dick move. Who sends an order and doesn’t include a note? That wasn’t punk at all.

It’s funny what sticks with you, but Rob’s reaction that day definitely did and a few years later when I started my own label (Toybox Records, which I shut down around ’97 I think? ’98 maybe.) I took that to heart and went out of my way to include a note, no matter how short – just something personal, in every order I shipped out. It was important. This personal connection we all had with everyone else in the scene, even people we’d never met. There was this thing that tied us all together and we knew it, and a little note in an order, a “thanks, hope you like it” or whatever made all the difference in the world.

This was a long time ago. I communicated with people online via BBS’s and #irc and wouldn’t have my first email address for another 2 or 3 years when I moved to Gainesville and took over my roommate Anatol’s email account because he couldn’t imagine ever having a need for it himself. Anyway, point is back then we wrote real letters to people and when you ordered something getting a note in the package said “you aren’t just a customer, this isn’t just business” and we all knew it.

Speed of communication was a big deal too, if something was urgent you called them on the phone but that came with long distance phone charges so it had to be important. For the most part a letter in the mail would suffice, knowing they’d get it in a few days and if they were super speedy in their reply by the end of the following week you’d hear back. So including a note in a shipped package was kind of killing two birds with one stone. There are many people I consider friends today who my first contact with them was a note in a package one of us sent the other. It was not unusual for notes in packages to lead to notes in envelopes.

Over the years with the influx of the web and email and so many other ways to communicate and connect with people, the handwritten note has become more and more rare. There are a few diehards who keep it up, but for the most part the communication and the shipping arms are independent. You could be talking to someone back and forth all day long over email while you are sending them something, so the importance of a note in the box became less of a signifier of a personal connection. That’s not good or bad, just different. I’m not saying “oh look how good the old days were” just noting that things changed. Progress, call it whatever you want.

I don’t expect a note anymore when I order things, and I’m not offended when there isn’t a note in a box. Once or twice a year I find a note, often just a simple “thanks!” but it’s enough to make me smile. At the end of last year I saw some friends online mentioning a poster that Buske Design had released. A Gorilla Biscuits reference which you should know I’m a sucker for. I ordered one and left town and forgot about it. This morning while going through the stack of mail I came home to I found a package and opened it and found this: 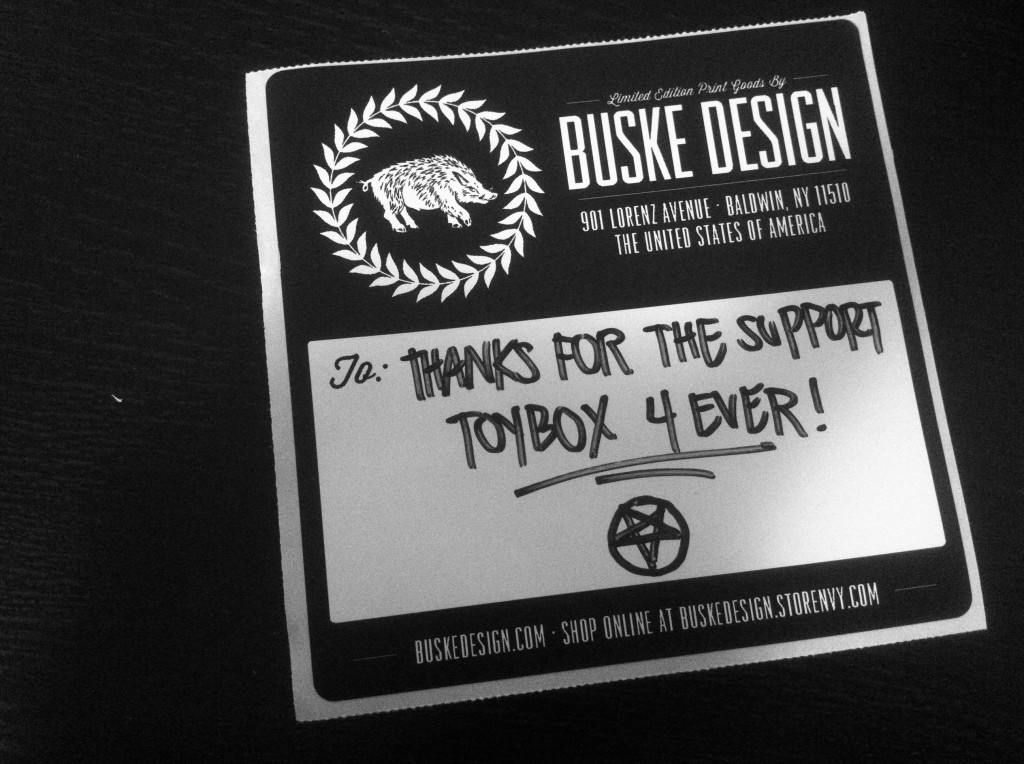 All Work And No Play Makes Jack A Dull Boy