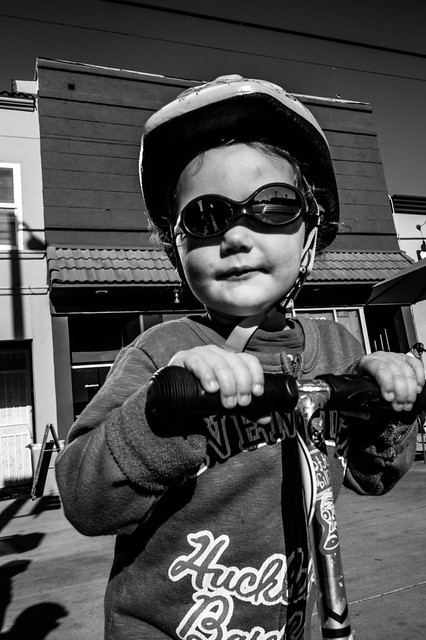 Ripley’s first day of pre-school is tomorrow. I think this is a big milestone as far as growing up goes.

My oldest memories date back to being in pre-school. My oldest real memories anyway, of actually doing things. I have flashes of images or of someone saying something, or being somewhere that might be older than that, but I actually remember doing things when I was in preschool. I remember an art class making bowls and self portrait figures out of clay. Apparently there was some kurfuffle because I sculpted myself naked and hadn’t skimped on the twig and berries. I think my mom actually still has those things in a box some where. Speaking of twigs, I remember playing outside of a classroom in a tent/igloo thing that someone had fashioned out of sticks and leaves. I remember climbing through these damp leaves in what I probably thought was a magnificent fort but was probably just a pile of yard scraps filled with worms and begging my father to come join me inside and him standing outside of it wanting nothing to do with it. He might have even been annoyed as he was probably there to pick me up and I was having too much fun playing to consent to leaving.

I remember the smell of the kiln in that art studio, I remember the main hall/theater where we’d go for music classes and the piano there that our teacher would play and sing songs to us. I remember the slope of the hillside behind the building and how much of an adventure it seemed to me at the time to go down the side of the building that didn’t have the nice path way. I remember being really happy there.

I remember even more from the following year – I went to the same school for pre-k and kindergarten but the classes were on opposite sides of the campus. Ha. Campus. It was a collection of converted bars with a little courtyard in the middle. Opposite sides of the property. That makes more sense. Very little kids on one side, slightly older kids on the other with lots of play time in the middle with everyone. I wrote about an experience I had with one of the even older kids a while ago and I’m realizing now that Ripley is only a year or so away from being the same age as I was when that was all happening.

I say that because until now I’ve had no idea what if anything he’ll remember. I figured it’s all kind of a blur. Will he remember living in Singapore or Paris? Probably not. Will he remember last December in Vienna? Maybe? But I know that over the next year some of the stuff is going to seriously stick – in detail – and he’ll take it with him the rest of his life. I think about that and I think about what I can do to make sure that he is as happy as I remember being and that he only has awesome memories burned into that permanent storage.

I don’t want him to remember me ever being annoyed with him.

I’ll never refuse to play in the leaves with him.