Tales from the frontlines of viral photography 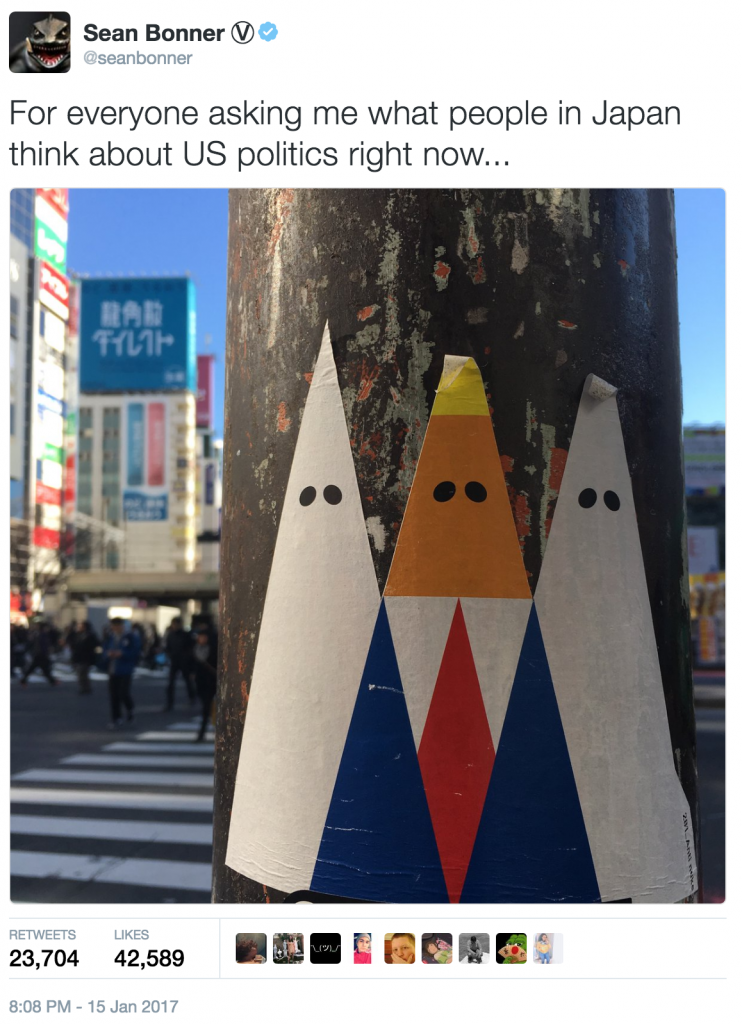 On Monday as I was heading home to Los Angeles I spotted a thought provoking sticker on a sign post in Shibuya and quickly sent it off to Twitter. Currently, less than 48 hours later my tweet has received over 23k retweets and 42k likes. And growing by the second. I note those stats specifically apply to my tweet only, but as it’s been reposted without attribution all over the place and gotten similar attention elsewhere so it’s likely in the hundreds of thousands collectively at this point, though I’ll never know for sure. This isn’t the first time one of my photos has ended up having it’s own life online but it’s still a very odd thing to experience and I thought some people might enjoy a little more detail and context about this how this has played out. I also have a book of some of my other Tokyo street photos that is available now, for a deeper dive into my photo work and the neighborhood surrounding where I took the above shot.

I know that my comment in the tweet plays in significantly to the reaction it received and I’ll spend more time on that later but upfront I want to acknowledge that the sticker (and the image on it) itself is the work of anonymous Japanese street artist 281_Anti nuke.  I’ve been familiar with his work for years. In the immediate aftermath of the Fukushima meltdown I, along with some friends, founded an environmental monitoring non-profit called Safecast and our office is right in the middle of Shibuya, Tokyo. The neighborhood is regularly plastered with 281_’s stickers and we’ve got a few up inside our office as well. My friend, filmmaker Adrian Storey who I’ve collaborated with in the past, even made a documentary about 281_ a few years back. Shortly after I tweeted this photo 281_ also posted the image of the sticker itself which sadly hasn’t received a fraction of the attention it should.

Very quickly after I posted it people took notice and started spreading it around. I think that is a completely factual statement because, as you can tell, it has in fact been spread around. And when I say “people took notice” anyone with half a brain can deduce that by saying “people” I’m referring specifically to the people that took notice and not “all of the people on the planet.” I point that out because the by and large the number one reply I’ve gotten in response is some form of argument pushing back that this doesn’t represent the views of all the people in Japan. Again, a painfully obvious observation.

Certainly, and to 281_’s credit this is a perfectly executed and highly charged political image so one might expect it to cause a bit of a ruckus, but perhaps more than anything I’ve ever posted this one seems to have drawn a significant reaction. Beyond arguing about what I meant by “people” the next most common thing sent my way was arguments about how racists/nationalistic/immigration-unfriendly Japan is so therefore this observation is irrelevant, which is of course a red herring if ever there was one. Racist history of America, Democrats, and other countries that aren’t Japan or the US were also brought into the argument left and right. In fact if you went through this list of logical fallacies you could find perfect examples for each in my twitter mentions right now. I probably shouldn’t have been, but I was genuinely shocked how defensive people were. Not all people on the planet, or all people on twitter, but all people who were defensive. Duh.

Of course there’s also the inevitable comments from people who don’t follow me, yet felt the need to take time out of their day to tell me they don’t care what I post or that I’m wasting their time. Time they spent replying to me I guess? The logic that works in some people’s heads is baffling.

I was also attacked and held suspect pretty frequently. A quick scan of replies finds no shortage of statements calling me a faggot, which I found hilarious in it’s retro cliche nature but was surprisingly being used as a genuine insult in these cases. For simply posting this photo and my observation I’m also apparently a liberal, libtard, SJW, fascist, racist, expat, tourist, etc in the eyes of anonymous twitter accounts with single digit follower counts. I find all of this terribly amusing and fascinating, though I can also understand how someone else in my shoes might take these attacks more personally. I’m simply lucky(?) to have 20+ years of experience with trolling so I see such retorts as almost a script that gets followed again and again with only minor details swapped out each time. So maybe these trolls and shitposters are just unknowingly taking my bait. Who’s trolling who??? I’m laughing, so that’s good enough for me.

A not insignificant number of replies also accused me of making and posting the sticker myself just to manufacture the drama, and even in the face of the existence of 281_’s own gallery showing the image, these folks would then jump to the conclusion that I created 281 as well rather than accept their initial reaction was misplaced. New thing time however was quite a few people calling this fake news. But I guess we all know that in 2017 “fake news” is a term applied to anything you don’t agree with, no matter it’s basis in fact.

Another new twist this time is the number of media outlets that have reached out to me. I’d say this is a net positive as most often in the past these places would just take the extra lame “it’s on the internet so anyone can use it” approach, so outlets asking for permission is a welcomed change. I use a CC-BY license for these kinds of things as there’s really no way I can stop people from stealing it and using it for whatever purposes they want so fighting that is a losing battle from the beginning, and I’m quite happy to just have proper attribution. More than one outlet did ask me to agree to their terms which would have given them an eternal, transferable, non-exclusive license to do whatever they wanted with it for ever and I said no and pointed them to the CC-BY license.

I don’t want to sound like the reactions were all negative, I’ve definitely gotten countless replies from people agreeing with the sentiment, or complimenting the photos which is nice. But at the end of the day, I really was just responding to a question I’ve repeatedly heard with a quick image that I thought answered it pretty well.