In efforts to deal with old age forgetfulness and a lingering case of screen aversion I’ve been trying to get in the habit of using my physical notebook. I wrote about this a bit before on my mailing list, moving from a small pocket sized moleskine to a larger journal type thing and using a modified bullet journal method for daily planning and notes and general keeping on top of things. I also like that, even though it’s purely functional for me, I feel like I’m making something.

While I’ve been enjoying the pen and paper aspect of using a pen and paper I’ve also found myself wanting a little more of a creative visual experience but I’m not fetishistic enough about this journal thing to spend endless hours doodling and and drawing on the pages like a damn pinterest board. A little while ago Warren (I think) mentioned getting one of these little pocket printers that allowed him to quickly snap a photo of something interesting and print it out and then slap it in his notebook for future reference. This notion has kind of stuck with me and last week I decided to pull the trigger. Twice actually.

I ordered and received two different mini printers, that function a bit differently with different desired outcomes. This is what I got:

Paperang
This is a super tiny thermal printer (which means it never needs ink), b&w only with questionable archival qualities (the basic paper is guaranteed to keep an image for a full year) but it’s fast and cheap and fun. While I got in with the intent to print little photos, the Paperang app also has a number of text and todo list templates and options that I can see myself playing with sometime in the not terribly distant future. I’ve been scotch taping a few quick prints with the default paper in to the notebook here and there and it’s added a very cool new layer to the look and feel of it. I also ordered some upgraded paper spools of sticker backed paper that is supposed to hold an image for 10 years so I won’t have to tape the prints in each time. Knowing that the image will eventually fade is interesting too because it keeps me from thinking anything is too precious, and also forces me to write a little something next to it explaining what it is. 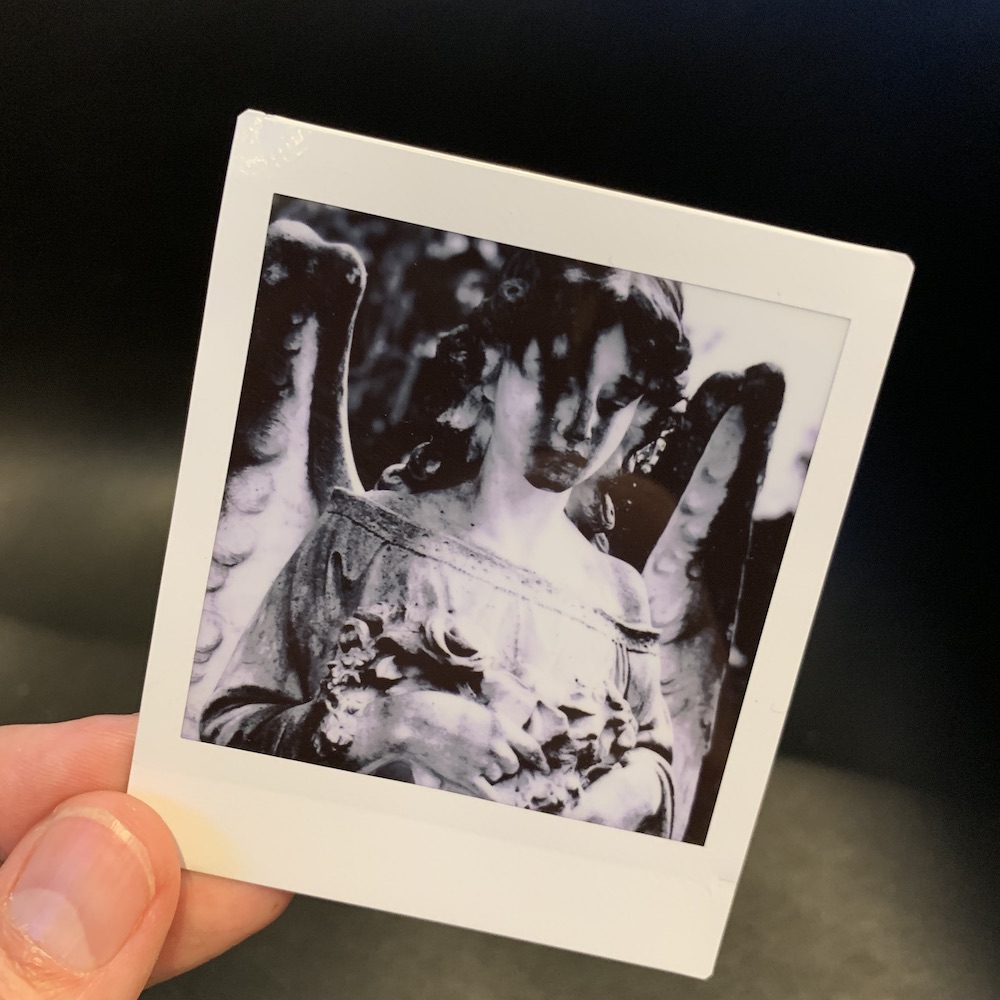 Instax print from the SHARE, photo taken on a Leica M10D

Instax SHARE
It’s no secret I like instant photos and that I have a softspot for Instax. I’ve got a few Instax cameras in various formats (I especially like the Instax WIDE monochrome film, though the camera for it is huge) but this requires planning ahead and carrying the camera around, and the film is kind of expensive for quick memory jogging notes to self. That said, being able to take any photo that I have on my phone and make a Polaroid style print anytime I want is kind of appealing. Between my regular carry around every day camera (currently a Leica M10D) and my iPhone (currently an XSMax) I have some pretty nice digital photos. So I picked up the new SP-3 which uses the Instax SQUARE film as I like that format (though I wish they offered a monochrome version) and have used to make a few prints of things I shot with these other devices. This is nice if I want to give a photo to someone, or include something I know will more long lasting (and thus, more thoughtful and artistic I guess). This also allows me to play more with this format, I really liked the Instax MINI print series Clayton did a few years ago and being able to physically riff on ideas is kind of fun.

Both of these printers are small enough to carry around in a hip/shoulder bag without much trouble and then always be available, though the SHARE is a bit bigger and heavier than the Paperang so in actual practice I don’t know how often I’ll really carry both around. Likely one or the other. Guess we’ll see. In the meantime I’m happy with the ability to hold in my hands something that was only in my head previously.

What’s In My Bag (travel edition)