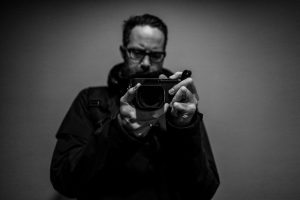 It’s rather difficult to explain what Sean Bonner does exactly, though he’s been referred to as an entrepreneur, publisher, journalist, musician, artists, activist, photographer, enthusiast… He calls himself a misanthropologist.

Currently Vancouver based, Sean Bonner is a co-founder of the non-profit Safecast and an Associate Professor at Toyko’s Keio University. He’s a published fine art photographer and releases ambient noise music under the name Delay 5000 (aka d5k). Previously he co-founded Coffee Common, the first hackerspace in Los Angeles Crash Space and was a founding collaborator to the multimedia art/music collectives Cross My Heart Hope To Die and Saturday Night Massacre. As a writer, he has contributed to BoingBoing, MAKE, Al Jazeera and others. He maintains a regular newsletter and became a Shuttleworth Fellow in 2014. He recently revived Toybox Records, a label he started in 1992.

The book Don’t Go Outside, a collection of Sean’s street photography from Tokyo was published in 2017. He’s been an Artist In Residence at the MuseumsQuartier in Vienna, a Hacker In Residence at Sparkfun in Colorado, and a Entrepreneur In Residence at The Groop in Los Angeles. A selected artist CV can be found here.

Over the last 10 years he’s spoken at events in Geneva, Hamburg, Berlin, Palo Alto, New York City, Austin, Vienna and others, though he’s currently taking a break from speaking.

In the 2000’s as co-founder of Bode Media Inc, Sean helped create Metblogs, the first global network of local media sites. He built the first version of Shepard Fairey’s Obey Giant website and helped Suicide Girls create their newswire. As a designer Sean has done work for Die Antwoord, Bad Brains and others.

Prior to all this, Sean helped build the groundbreaking contemporary art gallery sixspace exhibiting artists such as Glen E. Friedman, Shepard Fairey, Space Invader, Coop, Chad Robertson and others. He also ran a record label and produced several records by Hot Water Music and Less Than Jake among others. He’s managed his own design firm and designed things at Playboy and Victory Records, where he was the Creative Director during the mid 90’s. Way before that he was a dishwasher.